Prime Minister Tan Sri Muhyiddin Yassin, has set off a wave of boardroom changes at state-owned institutions and corporations.

SINCE coming into power in March, the Perikatan Nasional (PN) government, led by Prime Minister Tan Sri Muhyiddin Yassin, has set off a wave of boardroom changes at state-owned institutions and corporations.

At Khazanah, for instance, Muhyiddin has taken over as chairman since April 1, exactly one month after being sworn in as Malaysia’s eighth premier.

He replaced former premier Tun Dr Mahathir Mohamad, who had to relinquish that position after the fall of his ruling Pakatan Harapan (PH) coalition government in late February. 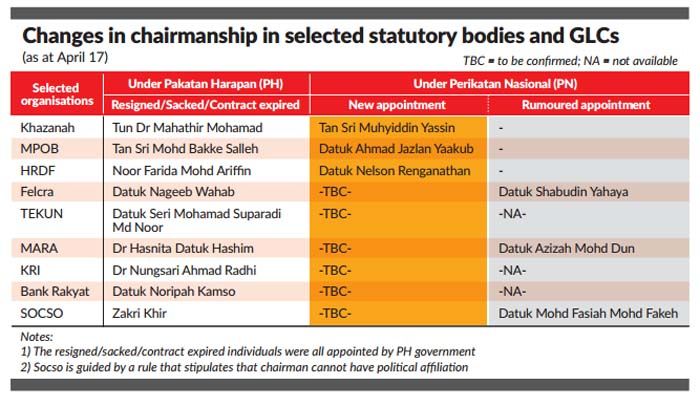 ’s non-executive chairman with effect from May 1.

Furthermore, Klang MP Charles Santiago was removed as chairman of the National Water Service Commission (SPAN) on April 10 but the removal was made public yesterday.

There has been widespread speculation of the imminent changes at the top GLCs, with many MPs slated to take over as chairmen of some of the plum GLCs in the country.

Although it remains conjecture at this point, checks by StarBizWeek have revealed that not all are correct.

A few existing MPs have turned down the suggested appointments.

Meanwhile, for positions that have already been vacated, Datuk Azizah Mohd Dun has been touted as the new Mara chairman.

This is to replace Dr Hasnita Hashim, who was sacked as Mara chairman on March 18, together with her entire board members, comprising economist Dr Nungsari Ahmad Radhi and businessman Datuk Wira Ameer Ali Mydin, among others.

At Felcra, Datuk Shabudin Yahaya is expected to become chairman, following the resignation of Datuk Nageeb Wahab early this month.

As for Socso, Sabak Bernam MP Datuk Mohd Fasiah Mohd Fakeh has initially been named as the likely person to take over as chairman after the recent resignation of Zakri Khir, a professional from the insurance industry.

However, Mohd Fasiah’s proposed appointment has hit a stumbling block, as Socso is guided by a rule that prevents politicians from becoming its chairman.

Malaysians will surely be following closely developments in this space.