IN the midst of the Covid-19 pandemic, every government is trying to ensure that they are able to contain the virus’ exponential rise.

Despite the efforts, the numbers continue to increase and we now have more than 2.18 million cases worldwide with 145,000 fatalities and counting. While the Covid-19 graph looks like an exponential graph (see chart), there is another graph that is also rising exponentially and that is the US Federal Reserve’s (Fed) balance sheet.

During the Global Financial Crisis (GFC) of 2008, one of the key frustrations among households in the United States was that the government was more willing to bail out Wall Street rather than the economic hardship that fell upon the people on the streets, i.e. Main Street. The emergence of the 99% movement in 2011 outlined the division between the have and have nots, and the economic inequality faced by the people as the wealthiest 1% gets to be rescued by the Fed. While Lehman Brothers was allowed to go under in 2008, the Fed had no choice but to bail out the likes of AIG, Bear Stearns, mortgage lenders like Freddie Mac and Fannie Mae in what was then the biggest bailout in history.

The US government even enacted bills to prevent companies becoming too big to fail to protect the American taxpayers. The aftermath of the GFC saw the Fed expanding its balance sheet so much that it grew from just US$900bil in early September 2008 to more than US$2 trillion to rescue Wall Street firms and thereafter doubled to more than US$4 trillion as it continued to support the economy and markets with its various quantitative easing (QE) programmes.

All the liquidity-driven moves by not only the Fed but also by the European Central Bank, Bank of Japan and even People’s Bank of China helped markets to scale greater heights as we build bubble after bubble around multiple-asset classes.

From equity markets to start-ups, valuations were all going through the roof. Even earlier attempts by the Fed to scale back its balance sheet was seen as detrimental to the market and the Fed could not even afford to see a little disruption in the market when it intervened in early September last year due to shortage of short-term money market funds in the banking system. 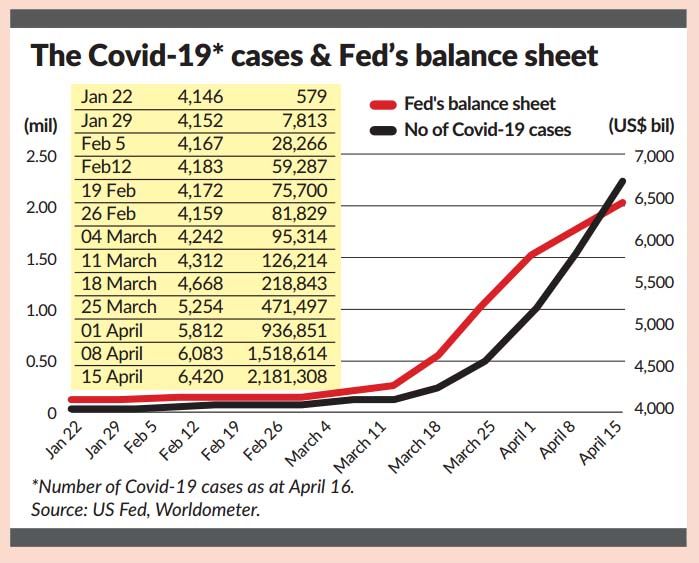 The Fed stepped in to provide liquidity and with that, we saw financial markets returning to some form of normalcy. The bottom line was that market players wanted the bubble to continue to expand.

Enter 2020, with Covid-19, no country was spared the impact of this devastating virus on the economy and livelihood of the people. Governments worldwide are scrambling to provide much-needed stimulus for their economies to ensure the most-affected people or businesses have some sort of protection and liquidity during this period. With businesses shut, employers cutting back, consumers spending less, unemployment rising, governments have no choice but to support the vulnerable sectors and households.

Just before the Fed released its biggest H-bomb to-date to the tune of US$2.3 trillion, the US weekly jobless claims hit 6.6 million last week and another 5.25 million this week, bringing the cumulatively total jobless claims to 22 million, equivalent to about 13.5% of the US labour force of 162.9 million as at end-March 2020.

While a portion of the Fed’s latest move do go to ease the burden of small and medium size companies as well as municipalities and states, it also pledged to start buying debts that are below investment grade (these are typically rated “BB” and below and defined as junk) and high yield (read it as junk bonds) exchange traded funds.

In the past five weeks, the Fed’s balance sheet had already expanded by US$2 trillion to a record US$6.42 trillion as it embarked on a range of measures to ensure markets remain liquid and functioning. With an added US$2.3 trillion programme, the Fed is poised to expand its balance sheet to grow up to US$9 trillion – a staggering amount by any standard as it may hit as much as 45% of the US GDP.

There is still no stopping the Fed as it has said that it will do whatever it takes to sustain the US economy (read here as “markets” based on Fed’s comments that it will undertake unlimited QEs).

Is this sustainable and what is the Fed trying to achieve?

The Fed’s latest move is a tricky one as it expands its programme to buy junk bonds but with some ground rules. According to the Fed, as long as these papers were investment grade before a certain cut-off date and if it gets downgraded later on to “BB” or below, the Fed will step in to buy these papers.

What is the message the Fed is trying to make here? What happens to letting market forces decide where these papers or even asset classes should be trading at? Is the Fed implying that it is the lender of last resort for these distressed financial papers too? Is this the function of a central bank? What happen to risk management and the doctrine of “caveat emptor”? Isn’t it the job of investors to take risk and manage that risk according to economic and market data? Is the Fed now saying, “don’t worry, I got you covered!

What else will the Fed be buying next? Modern art, collectibles, painting, properties?

After all, it was only late last year that a banana that was duct-taped on a wall was sold for US$120,000. Ridiculousness has reached no boundaries due to abundance of liquidity. Furthermore, even forever bleeding start-ups can reach unicorn status (valued at more than US$1bil when they are either loss making or still burning cash), what is US$120,000 for a banana on a wall?

The asset manager, in turn, can take profit on its investment and, of course, the asset manager can then declare a huge profit and reward himself with a nice bonus. Meanwhile, the man on the street is suffering. Chances are either he has lost his job or his income has been impacted and yet he still has to make sure that he is able to make ends meet and put food on the table.

Sooner or later, he is going to lose his home as he can’t afford to pay his mortgage, but the guy working on Wall Street is thinking of his next holiday, post lockdown period, with the bonus and salaries he is making.

With the Fed’s liquidity injection, the markets definitely welcome the move as nothing helps the market better than a reassurance from the central bank that it will be there to support market participants, be it equity, fixed income or even start-ups. The Fed’s extended hands in supporting financial market is creating moral hazard as it is indeed giving a wrong signal to Main Street and at the same time rewarding miscalculated financial moves by money and asset managers with a bailout.

The Fed’s unstoppable move to expand its balance sheet also means that markets are effectively disconnected with the real economy. The Dow, which has dropped as much as 37.1% from its Feb 12 high, is now higher by 26.6% from its low and the market is in a “bull market phase”, thanks to the Fed’s move, while the economy is likely in recession by now.

The latest rally also means that the Dow Jones is just about 6,000 points or 25.5% away from its all-time high achieved in February this year. The National Bureau of Economic Research which is responsible in identifying the month the US economy has entered or exited a recession period has yet to make an official statement, although we all know by now that the United States is surely in recession already judging by the level of unemployment and the near-collapse of April 2020 Michigan Consumer Sentiment which fell to just 71.0, the lowest since 2011.

Hence, we are in a very unique situation as there has never been a time in history that the Dow is in bull market phase while the economy is entering a recession. A clear disconnect that sooner or later will be corrected as the market cannot be in a bull phase when the economy is in recession. There is so much that liquidity can provide support to the market but sooner or later, the fundamentals will prevail as investors look at hard financial and economic data to gauge market levels and not whatever the Fed does to ensure market remains elevated so to please Wall Street rather than Main Street.

With all the liquidity that is helping the market rather than the man on the street, it is clear the winner here takes it all, as wealth inequality in our society continues to expand.