Close to 95% of Rubberex’s products are exported to over 100 countries, with its main markets being Europe, North America and Asia.

, a small-cap glove maker, attracted interest following a change in shareholding, which saw the entry of Datuk Ong Choo Meng as the single largest shareholder with a 31.33% stake.

For those not in the know, the 41-year businessman is currently the executive director at Hextar Global Bhd – a Main Main-listed company involved in the manufacturing and distribution of agrochemicals.

This follows the exit of Med-Bumikar Mara Sdn Bhd (MBM) as Rubberex’s major shareholder, a development that piqued curiosity because it comes at a time the Covid-19 outbreak is driving up demand of glove products.

Rubberex manufactures household and industrial gloves, plus nitrile disposable gloves that are used by practitioners in the medical field.

A filing with Bursa Malaysia on Monday showed that the private company had ceased to be a shareholder of Rubberex after it sold all of its 67.3 million shares or 26.69% interest in the company.

The sale was done in one transaction to Choo Meng, believed to be at a price of 83.5 sen a share in a deal value at about RM56mil.

Stock exchange filings showed that Choo Meng bought Med-Bumikar’s block of shares on Feb 28 and thereafter raised his interest to 31.33% following more acquisitions of the company’s shares in early March.

The stake, which is marginally below the 33% threshold to trigger a mandatory general offer, would give Choo Meng considerable sway over the company’s decision-making.

What is Choo Meng’s plan for the company remains to be seen for now.

Notably, Rubberex is now on a better financial footing after selling its loss-making China manufacturing operations in late 2018. Since then, the Ipoh-based company has been focusing on its local operations and directed its resources into the “correct” segment, namely in the making of nitrile disposable gloves.

Rubberex managing director Khoo Chin Leng, when contacted, declined to comment on the changes at the shareholder level.

Operationally, he said the company is seeing demand exceeding supply by manifold since the outbreak of Covid-19.

“We are running at full capacity, as per Miti’s (Industrial Trade and Industry Ministry) compliance. Our orders run up until the end of the year and we have received many queries from Europe, plus from other parts of the world, ” he told StarBiz.

At present, the company’s plant is able to churn out about one billion pieces of nitrile disposable gloves per year. The company hopes to increase capacity by another 1.5 billion pieces a year when its factory expansion comes on stream by the middle of the year. If business is good, it is looking to expand further in 2021.

Close to 95% of Rubberex’s products are exported to over 100 countries, with its main markets being Europe, North America and Asia.

It has a unit in Spain to service its biggest customers there plus to facilitate the distribution of its gloves around Europe, which contributes a big chunk to total revenue.

Considering that Hextar’s presence is mostly local, excess to a wider market beyond the country is something that could be leveraged on, an analyst said.

As for Med-Bumikar, it appears to be an opportunity to monetise some assets it has been owning for a long time.

“Med-Bumikar has been a promoter of Rubberex since the late 1980s. Some of their shareholders are old timers in the corporate world and may be wanting to monetise their investments, ” said the analyst.

Besides Mara, six families own the remaining shares in Med-Bumikar. The private vehicle also owns a 49.5% stake in MBM Resources Bhd

Rubberex shares closed unchanged at 82.5 sen, after hitting an intra-day high of 84.5 sen. A total of 3.56 million shares were transacted. At this level, the stock’s market cap stood at RM208mil.

Through Waras Dinamik Sdn Bhd, Choo Meng together with vice-chairman Datuk Ong Soon Ho, is a substantial holder of Hextar. Waras Dinamik owns an indirect 52.057% interest in Hextar, which has a market cap of RM414mil based on yesterday’s closing price of 50.5 sen.

Soon Ho and Choo Meng were once major shareholders of Denko Industrial Corp Bhd but divested the 18.53% stake they collectively held about three years ago. 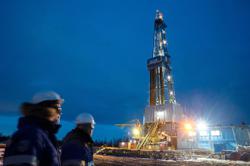