Bank Negara Malaysia (BNM) in its Financial Stability Review Second Half 2019 released last week gave some interesting insights into the Malaysian household sector, in particular the resilient nature of the households, with stress test scenarios, should either the property market or the equity market experiences significant decline.Overall, according to BNM, Malaysia’s household debt to GDP remains elevated at 82.7% as at end 2019.

THE Malaysian households are indeed pillars of the economy as they are basically drivers of domestic consumption and with that the health of the households is an important gauge for any central banks.

Bank Negara Malaysia (BNM) in its Financial Stability Review Second Half 2019 released last week gave some interesting insights into the Malaysian household sector, in particular the resilient nature of the households, with stress test scenarios, should either the property market or the equity market experiences significant decline.

Overall, according to BNM, Malaysia’s household debt to GDP remains elevated at 82.7% as at end 2019. 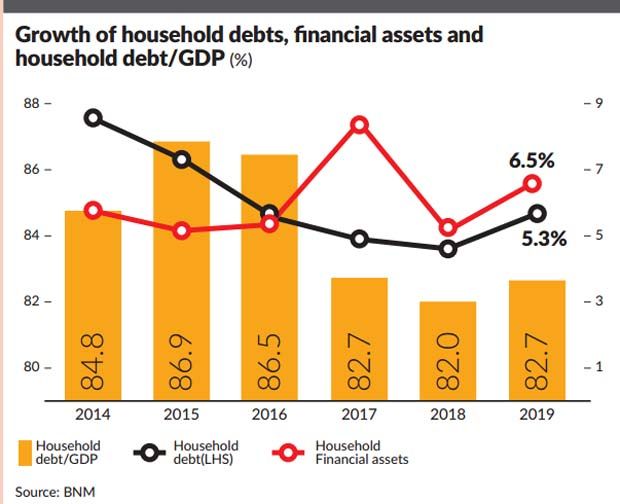 On global perspective and when compared with the region, the compiled data from Bank of International Settlements (BIS) gives us some comfort that Malaysia’s household debt to GDP is still at manageable level.

Based on BIS definition of core debt, Malaysia’s household debt to GDP stood at 68% as at end of 3Q 2019 and in actual fact it has remained relatively stable at between 66.2% and 69.8% for the past six years.

In comparison with other Asian nations, our core household debt to GDP is lower than South Korea, Hong Kong and Thailand but much weaker than Japan, Singapore and China.

Meanwhile, countries like Indonesia and India have even lower ratios, perhaps due to the larger exposure to informal borrowing sources. To understand Malaysia’s household debt and assets, we need to dissect what are the components of the two. First, lets look at household debt.

The total amount outstanding as at end of 2019 was at RM1.25 trillion. Of this amount, it is estimated that residential properties is the major portion of total household debt and accounts for about 54.3% of the total or RM679bil.

The balance 45.7% household debts are mainly from purchase of motor vehicles, personal finance, credit card, non-residential properties, purchase of securities and others. Malaysia’s household financial assets meanwhile stood at RM2.71bil as at end of 2019. These are mainly in the form of EPF balances, bank deposits, unit trust funds, equity holdings and surrender value of insurance policies.

Hence, in actual fact, our household financial asset to household debt ratio is more of a liquidity measurement rather than straight debt-to-asset measurement. According to BNM, Malaysia’s loan-to-value ratio (LTV) as at end 2019 stood at 57% against 59% in 2018, which basically suggests that total asset value of properties that are under mortgage has some RM1.19 trillion in value. If we were to add this figure into the household financial asset figure of RM2.71bil, we now have a total household asset value of RM3.9 trillion.

This straight away boost the household asset to debt ratio to as high as 312%. In actual fact, we have even higher ratio as the household asset to debt ratio does not take into consideration immovable properties that are fully paid for and motor vehicles, either under financing or fully paid for. In essence, Malaysian households are in actual fact a healthy lot as debt as a percentage of assets is probably only at between 25% and 33%.

But, at the same time, there are worrying signs out there as the market is fixated with the headline household debt to GDP ratio as reported by BNM. With the economy poised to go into recession this year, there is a possibility that Malaysian households may find it tough to make ends meet, despite the government’s recent efforts to provide some comfort in the form of handouts, especially to the B40 and M40 groups.

Based on BNM’s monthly statistic figures, the banking system has some RM1.772 trillion in outstanding loans as at end Dec-2019. Of this, RM138.5bil or some 7.8% is loans extended by the banking sector for personal use and credit card with about 70% meant for the former and 30% for the latter.

As a percentage of household debt, this RM138.5bil figure represents some 11.1% of the total as at end 2019. This was an improvement of 0.2 percentage points from the 2018’s figure of 11.3% as the pace of growth in personal loans and credit card increased 3.1%, slower than the growth of 5.3% in total household debts. Question is, with the economic fallout from Covid-19, would households demand for personal loans and credit cards increase to tide them over during this difficult period?

A recent survey by the Department of Statistics showed that Malaysians generally are tightening their belts, well at least during the Movement Control Order (MCO) period. Household spending has effectively collapsed as it dropped a staggering 55% to just RM2,813 from RM6,317. Even household spending excluding non-consumption expenditure declined 48% to RM2,110 from RM4,033. This shows that non-consumption expenditure effectively dropped as much as 69% during the MCO period. 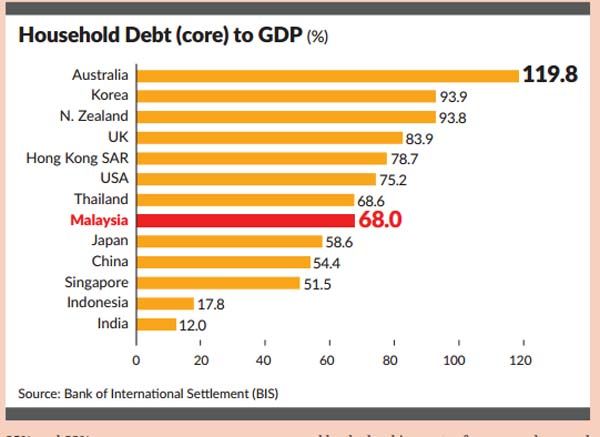 While the MCO has changed our consumption behaviour, it is likely that our habits post MCO will not revert to the norm and hence we are able to “make do” with what we have to a large extent. This will be good for the health of our households as they could than take the opportunity to reduce their riskier and pricier debts, which effectively carry a higher interest rates than a normal mortgage. Perhaps the ratio of personal loan and credit cards will see a contraction this year, if the economic malaise post MCO is not too damaging on household income.

However, should economic situation remain difficult, especially to the B40 or M40 group, there is strong likelihood that the avenue for short-term credit will be from higher demand for personal loans and credit card spending. With a contraction in GDP this year, we may see the ratio of these riskier household debt as a percentage of GDP scale higher.

Will this be the case? Only time will tell. But for now, our households are reasonably covered based on strength of the sector’s assets, both financial and non-financial assets, irrespective what the headline household debt to GDP implies.