While Malaysia will not be spared from the global growth contraction this year due to the Covid-19 pandemic, the central bank is confident that the Malaysian economy can weather the challenges.

BANK Negara has some good news and bad news on the economy in 2020.

In its latest Economic and Monetary Review 2019 report, the central bank has warned that Malaysia will not be spared from the global growth contraction this year as a result of the Covid-19 pandemic.

While governor Datuk Nor Shamsiah Mohd Yunus has carefully avoided the usage of the word “recession” for Malaysia, Bank Negara’s official forecast points towards an economic growth in the range of -2% to 0.5%.

Output is expected to decline across all sectors, except for services, although it is forecast to witness a much slower growth.

The economic growth would be weighed down by the output loss from Covid-19, the movement control order (MCO) as well as the disruption in the commodity supply. 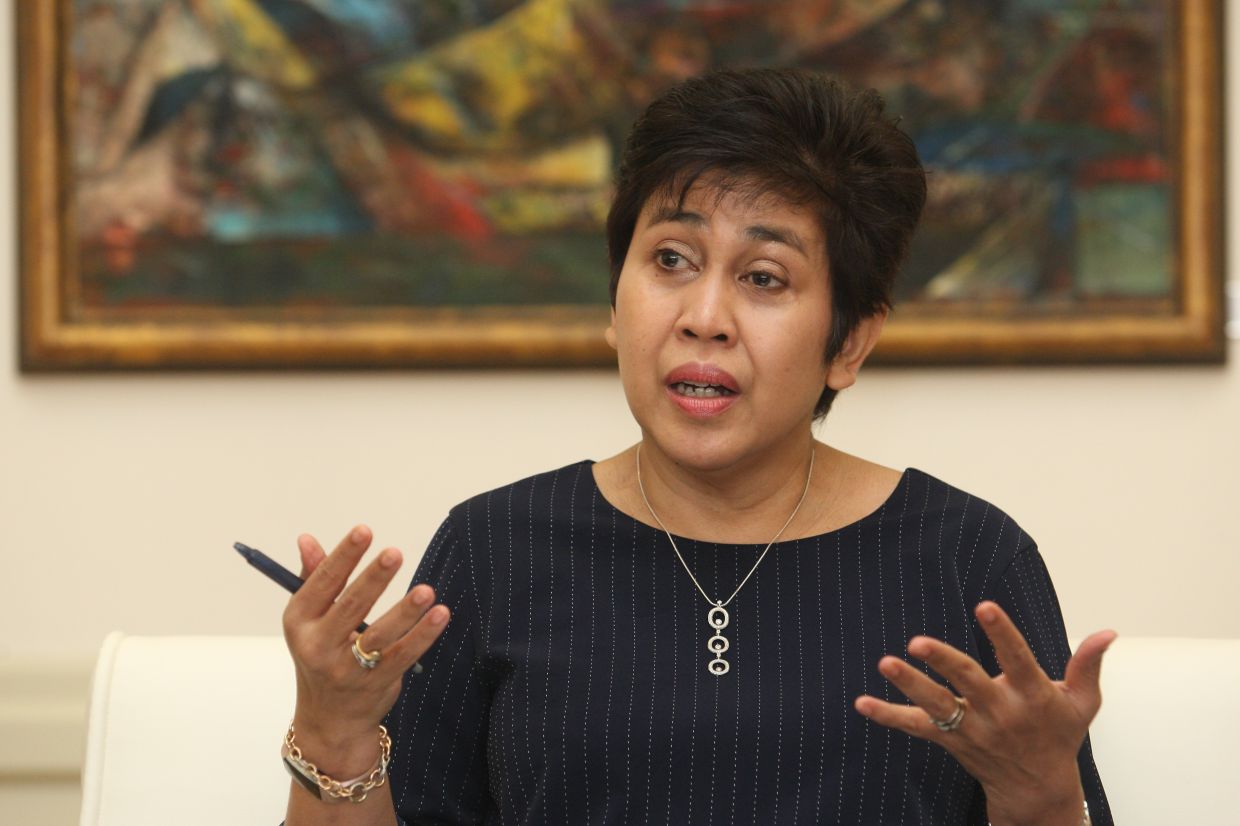 Nor Shamsiah: The central bank has a broad range of policy instruments at its disposal to ensure monetary and financial stability.

Meanwhile, with demand expected to remain subdued amid the low global oil prices, the country’s headline inflation rate is estimated to average between -1.5% and 0.5% this year.

This means that the country faces a potential “twin threat” - recession and deflation - if the economy contracts and the consumer price index declines this year.

A deflationary pressure, if it turns severe, could further exacerbate the impact of a recession and delay the rebound in economic growth.

Another key concern highlighted in the Economic and Monetary Review 2019 report is the impact on export performance.

Bank Negara expects Malaysia’s exports to tumble by 13.6% in 2020 due to the weak external demand, as key trading partners of the country experience production interruptions following the Covid-19 pandemic.

As the private sector takes a major hit due to the business shutdown in response to the worsening virus outbreak, the labour market is also likely to be impacted.

The world, including Malaysia, is currently in uncharted territories as the global economy is hammered by a pandemic-induced slowdown.

It is, hence, crucial to understand that any forecast by Bank Negara or other experts will largely depend on how fast the world can solve the virus outbreak.

A prolonged pandemic could further weigh down the economy and result in a worse-than-expected performance. This includes Bank Negara’s projections.

For now, the prospects for both advanced and emerging economies are deteriorating as the pandemic escalates.

The International Monetary Fund has recently warned that a global recession in 2020 will be “at least as bad as during the 2008-2009 global financial crisis or worse”, although it said that a recovery is expected in 2021. 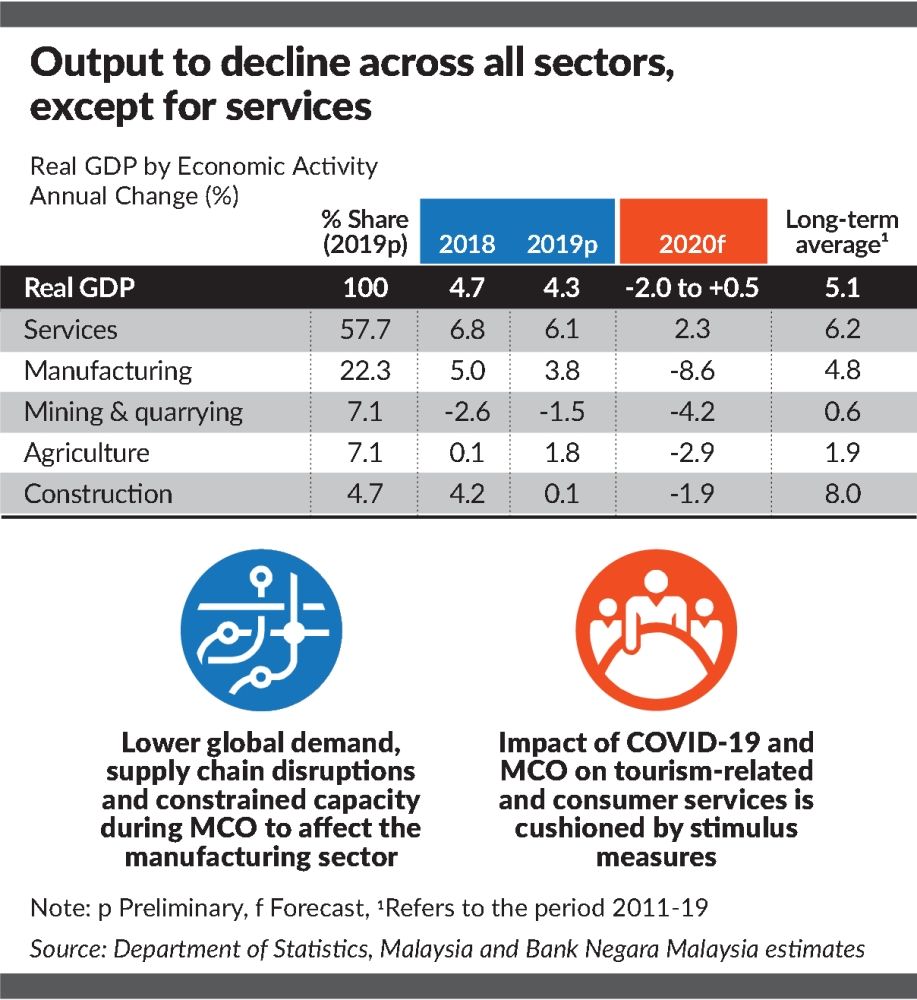 On the domestic front, Nor Shamsiah is confident that the Malaysian economy can weather the current challenges and emerge stronger.

She adds that the central bank has a broad range of policy instruments at its disposal to ensure monetary and financial stability.

“We have done it before in handling the previous crises. We can definitely do it again, ” she said during a virtual press conference on April 3.

Despite the headwinds, Nor Shamsiah points out that there are several key catalysts that will support the country’s economic growth in 2020.

These include the government’s RM250bil economic stimulus package, Bank Negara’s move to cut the overnight policy rate, the continued progress of public projects, as well as the higher public-sector expenditure.

She says the government’s stimulus package alone is estimated to add 2.8 percentage points to the GDP growth in 2020.

“Pakej Rangsangan Ekonomi Prihatin Rakyat 2020 will cushion the impact on households and businesses, ” she says.

“Capital spending for major transport infrastructure projects of about RM15bil is expected to lift 2020 GDP growth by 1 percentage point, ” says Nor Shamsiah.

A key takeaway from the press conference is Nor Shamsiah’s assurance that the current slowdown will not result in a banking crisis.

Being the bedrock of the economy, a collapse in the banking sector would trigger a systemic crisis that will affect other sectors in the economy.

“The financial system is well positioned to support the economy, given the strong buffers built up over the years.

She also points out that the Malaysian financial system has ample liquidity buffers. As of February 2020, the liquidity coverage ratio stood at 148%, up from an average of 137% in the 2015-to-2019 period.

In addition, adequate provisions have also been set aside.

“Our stress tests affirm the resilience of the financial system even under severe economic conditions. Capital buffers are sufficient to absorb potential losses, ” according to Nor Shamsiah.

The governor says that private consumption will continue to anchor domestic economic growth, even though it is expected to expand at a slower pace of 4.2% in 2020 as compared to 7.6% in 2019 and 8% in 2018.

Nor Shamsiah believes that the economy could see a recovery by the second half of this year, followed by a stronger growth in 2021. 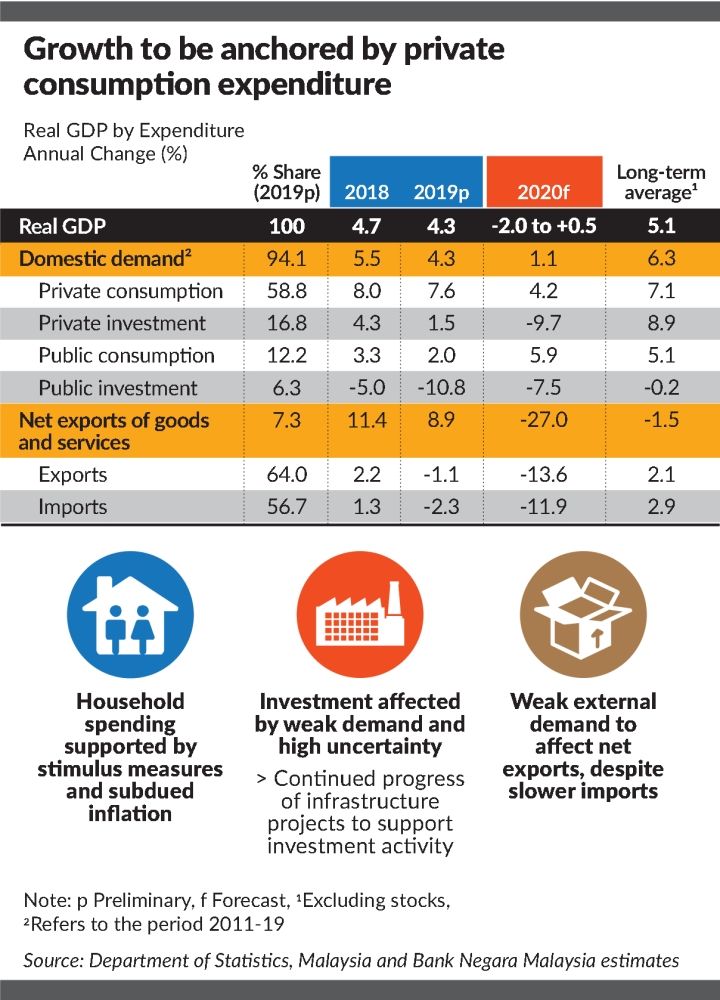 What the experts think

Speaking to StarBizWeek, AmBank Group chief economist Anthony Dass says the probability of a full-fledged recession in 2020 is 40%, with room to be either upgraded or downgraded.

“For the economy to dip into ‘full’ recession mode, which we project at -1.1%, much will depend on how long the lockdown will be, the outlook of the commodity prices that has taken a hit, the risk of global liquidity crunch and domestic overall confidence, especially with rising unemployment that will dampen spending which in turn will impact business sales revenue.

“Hence, avoiding falling into a full-fledged recession could be mitigated if the stimulus measures are implemented fast with improved engagement between the policy-makers and business communities, ” he says.

On price pressures, Dass says that deflationary risk cannot be ruled out.

According to him, the collapse in inflation expectations across many major economies including Malaysia is being stoked by the huge drop in oil prices to about US$30 per barrel and excess capacity from the virus impact and rising unemployment which will weaken demand.

“The risk of falling into deflation depends on how policy-makers respond to the coronavirus outbreak. Our inflation outlook is 0.3% with the downside at -1.5%, ” says Dass.

On the other hand, Alliance Bank chief economist Manokaran Mottain does not expect deflation to kick in this year. He forecasts a mild inflation of 0.5% in 2020.

“Despite falling oil prices coupled with weaker demand, in the first two months of 2020, we are experiencing 1.6% and 1.3% solid inflation, due to a low base effect last year, and we expect that with the renegotiation of Opec+, with the support of the US president to cut oil production, oil prices will rebound eventually, maybe during the second half of the year, ” he says.

Meanwhile, Socio-Economic Research Centre executive director Lee Heng Guie says that it would take at least six to 12 months from containment, stabilisation and recovery before people and businesses return to normalcy.

“Even after the MCO is lifted, we expect continued stricter physical procedures and measures, including social distancing at public places.

“We are pinning hope that the sizeable cash handouts and cash-flow cushion provided to the households would help to release pent-up consumer spending when the virus outbreak stabilises and sentiment improves, and hence, help to generate domestic demand, ” he says.

On the issue of unemployment, Lee says the jobless rate could rise higher than the projected 4% or 629,000 persons this year.

“Higher retrenchments would weigh on consumer spending. The biggest worry is that those who are affected by a paycut or got retrenched during the six-month moratorium on loan facilities could face cash-flow problems to resume their loan repayment after the expiry of the moratorium period, ” he says.