Huawei reports jump in 2019 profits despite US blacklist

HONG KONG: Huawei Technologies Co reported a healthy bump in revenue and earnings for 2019, in spite of a sustained effort from the United States to curtail its business on the global stage.

The rate of growth was roughly the same as the previous year’s, indicating that the prolonged scrutiny and sanctions from Washington failed to reverse the company’s upward momentum.

Still, Huawei’s business has been transformed by the tumultuous year, as its previously global growth narrowed sharply to a focus on the domestic market.

The Shenzhen-based company’s profit improved to 62.7 billion yuan, off sharply from 2018’s pace. The Trump administration’s campaign to get allies such as Japan and Australia to shut out Huawei gear and phones helped drive sales in the Asia-Pacific down 13.9%, though that was more than offset by a surge at home in China.

In the fourth quarter alone, which was most impacted by the US prohibition on Huawei selling Android phones with Google’s mobile services, the company shipped roughly 55 million devices, calculated from the difference between its September shipments update and the year’s total. Of the 240 million shipments of Huawei and Honor phones, 6.9 million had fifth-generation wireless networking, an area where the company remains a tech leader.

Contrary to warnings from American lawmakers and diplomats, numerous European countries like the United Kingdom and Switzerland have opted to use Huawei’s technology in building out their 5G networks. The UK and Germany have both echoed US concerns about how far Huawei can be trusted with key infrastructure of the future, but those have not extended to the severity of an outright ban.

Huawei faces tremendous pressure in overseas smartphone markets, where the US ban on its use of Google Mobile Services severely undercuts the appeal of its devices. Without the Google Play Store and third-party app ecosystem, Huawei phones simply can’t compete with similarly capable alternatives from the likes of Samsung Electronics Co and OnePlus. The company reported flat revenue in Europe, the Middle East and Africa alongside the drop in the Asia-Pacific.

Those regions were two of its major growth engines in 2018, whereas now 59% of its sales are at home in China.

China’s ambitious 5G network construction projects, which started in the second half of last year, helped Huawei weather the international storm and sustain its core businesses.

Founder Ren Zhengfei initially estimated that Huawei’s May 2019 blacklisting by the US could wipe US$30bil off annual revenues and threaten his company’s very survival, though he has tempered that outlook more recently.

Huawei mobilised a massive effort to develop in-house alternatives to American software and circuitry, while US suppliers like Intel Corp and Microsoft Corp found ways to continue supplying Huawei vital components it needed to make its products. It is also selling base stations free of American technology to bypass the US ban. — Bloomberg 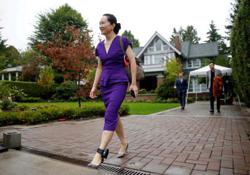 Huawei CFO to find out if her extradition case will proceed