CGS-CIMB Research said in the longer term, it continues to like VS Industry as it i) is a beneficiary of the outsourced manufacturing trend, ii) offers decent FY20-22F dividend yields of 3.9-5.6% and iii) has a strong balance sheet (negligible net gearing as at end-2QFY20F).

KUALA LUMPUR: CSG-CIMB Equities Research reiterated its Add call for electronics manufacturing services company VS Industry with a lower target price of RM1.20, in line with its earnings cut after the first half core net profit was below forecast.

It said on Friday the RM1.20 TP was based on an unchanged 14 times CY21F price-to-earnings (P/E) -- in line with three-year sector mean P/E.

“We think the sharp share price correction (-52% from recent peak) has more than priced in the weak earnings outlook ahead.

“In the longer term, we continue to like VSI as it i) is a beneficiary of the outsourced manufacturing trend, ii) offers decent FY20-22F dividend yields of 3.9-5.6% and iii) has a strong balance sheet (negligible net gearing as at end-2QFY20F), ” it said.

CGS-CIMB Research said VS Industry’s 1HFY20 core net profit of RM80.9mil came in below its and consensus expectations at 46% of its and 47% of consensus previous full-year forecasts.

This was mainly due to weaker-than-expected sales orders for its Malaysian operations.

Despite 1HFY20 revenue declining by 9.6% yoy, core net profit improved by3.8% yoy, mainly due to lower losses at its China operations as VS Industry has been actively streamlining costs and adopting an asset-light model in view of the US-China trade war.

Its 2QFY20 core net profit declined by 13.9% yoy and 31.1% qoq, mainly impacted by a slowdown in sales for an end-of-life product for its key customer in its Malaysian business.

This was partially offset by the ramping up of its maiden product line for Bissell (a new US-based customer secured in FY19).

CGS-CIMB Research said in the near term, it expects VS Industry’s earnings to be impacted by the movement control order (MCO) imposed by the Malaysian government which has been extended to April 14 from March 31.

“We expect VS Industry’s Malaysian operations (made up 85% of 1HFY20 revenue) to halt during this four-week period as we gather that VS Industry’s operations are not deemed essential based on the guidelines given by the government.

“In the medium term, we also think that order flows from its customers are likely to be hit due to weakening end-demand as a result of the economic fallout from the Covid-19 pandemic.

“To factor in lower revenue and margin erosion from under-utilisation during the MCO period (four weeks) and potentially weaker end-demand in the near to medium-term, we slash our FY20-22F EPS forecasts by 24.7%-36.0%.

“We estimate that every one week extension of the MCO potentially reduces our FY20F earnings forecasts by c.2-4%, ” it said. 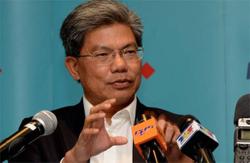