Namaste:Bezos is in New Delhi for the Smbhav summit, an Amazon India gathering for small and medium businesses, where he announced Amazon will invest a fresh US$1bill to help bring such companies online. — Reuters

BANGALORE: Amazon.com Inc chief executive officer Jeff Bezos got a bitter reception during his India visit this week after the country’s anti-trust regulator initiated a formal investigation hours before his arrival and infuriated small store owners demonstrated in the streets.

Bezos is in New Delhi for the Smbhav summit, an Amazon India gathering for small and medium businesses, where he announced Amazon will invest a fresh US$1bil to help bring such companies online.

He also committed the retail giant to exporting a total of US$10bill of made-in-India goods by 2025.

“The 21st century is going to be the Indian century, ” the Amazon founder said.

“This country has something special: its dynamism.

“I also predict that the most important alliance in the 21st century will be between India and the United States.”

Dressed in blue jeans and a vest echoing Indian Prime Minister Narendra Modi’s favourite garment, Bezos lifted a ceremonial lamp to inaugurate the summit. A day earlier, he put out a rare tweet to publicise his visit to the Mahatma Gandhi memorial, where he wore a white tunic and a rust-colored Indian vest.

India is arguably Amazon’s most important overseas market and a key growth driver, however the small businesses that the CEO is hoping to endear himself to are organizing in opposition.

The Confederation of All India Traders announced that members of its affiliate bodies across the country would stage sit-ins and public rallies in 300 cities to raise a war cry against the world’s largest online retailer.

In a letter to Modi last week, the confederation’s Secretary General Praveen Khandelwal alleged that Amazon, much like Walmart Inc.-owned Flipkart, was an “economic terrorist” who engaged in predatory pricing that deprived the government of tax revenue and “compelled the closure of thousands of small traders.”

Priyadarshini Durairaj, digital marketing officer at Chennai-based Naga Ltd., said she was at Smbhav with an open mind.

“Brands like ours, ” she said of Naga, which makes and sells pasta on Amazon and other online and offline outlets, “need to understand platforms’ plans and offerings for sellers like us.”

India’s e-commerce market is projected to grow to US$150bil by 2022, according to a 2018 report by software industry group Nasscom and consulting firm PwC India. Competition for this rapidly expanding sector is intensifying as Asia’s richest man, Mukesh Ambani, prepares to go live with JioMart, an online shopping platform challenging Amazon and Walmart directly.

The latter’s Flipkart Online Services Pvt is also delving deeper into the countryside in its pursuit for more customers.

Amazon, for its part, opened a huge office complex in the southern city of Hyderabad in September, underscoring its commitment to the country.

The Competition Commission of India said it would probe the deep discounts, preferential listings and exclusionary tactics that Amazon and Flipkart are alleged to have used as anti-competitive levers.

India’s trader bodies have long argued that both retail giants were flouting rules by promoting sales and discounts through their favored sellers, many of whom they have preexisting commercial arrangements with.

The regulator has ordered for the investigation to be completed within two months. — Bloomberg 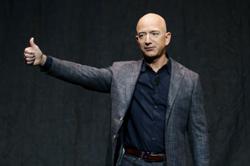