LONDON: Ryanair Holdings Plc became the first airline to scale back growth plans for next summer due to the grounding of Boeing Co’s Max jet, a sign the crisis is beginning to impact long-term planning at major carriers.

With a return date for the Max still uncertain after two fatal crashes, Ryanair is likely to receive barely half of the 58 planes it was expecting for the 2020 peak schedule, the Irish company said yesterday, estimating that the reduction will wipe five million passengers from its full-year tally.

“Boeing is hoping that a certification package will be submitted to regulators by September with a return to service shortly thereafter,” chief executive officer Michael O’Leary said in a statement.

“We believe it would be prudent to plan for that date to slip by some months, possibly as late as December.”

Ryanair’s announcement shows how a further extension to the Max grounding would have significant fallout for airlines, which draw up future schedules about six months in advance.

Air travel is particularly weighted toward the summer season in Europe, with passenger numbers typically surging from the Easter holiday, which starts on April 10 next year.Europe’s biggest discount airline faces a particular issue because it has ordered the high-capacity Max 200 version of the 737, which requires separate certification from US and European regulators.

Approval for flights could take up to two months beyond the baseline model’s return to service, it said.

Other Max customers are already beginning to look at fleet plans for next year in case the grounding drags on. TUI AG, the world’s biggest travel company, wants the model to replace existing 737s and at some point will need to decide whether to keep the older aircraft in service, a spokesman said.

Norwegian Air Shuttle ASA has the greatest current exposure in Europe to the Max crisis, with 18 planes grounded, but agreed in April to postpone the handover of 14 more due in 2020 and 2021 and keep older planes for longer as it reins in capacity as part of a plan to resolve a debt crisis.

FlyDubai, which has idled 14 Max planes and has a total of 175 on order, said last week that the continued grounding had forced it to delay the Oct 1 launch of flights to Budapest, suggesting that passengers switch to sister company Emirates.

Emirates president Tim Clark himself predicted in June that the model wouldn’t return to the skies until next year because the need for national and regional regulators to agree a common position.

In the US, American Airlines Group Inc and United Airlines Holdings Inc last week pulled the narrow-body off their schedules through early November, in the latest sign the jet may not resume commercial service this year.

O’Leary, who warned last week that Ryanair might need to pare growth plans in light of the Max crisis, said his company can only take delivery of six to eight new aircraft a month, and is now planning on having 30 incremental aircraft for next summer.

That will cut the growth rate to 3% from 7%, necessitating some base cuts and closures for both the coming winter schedule and the 2020 peak, the airline warned, with discussions with airports and unions set to determine which of its poorer-performing operations will go.

Ryanair said it will work with Boeing and the European Aviation Safety Agency to recover the delivery delays during the winter of 2020 in order to restore our growth to “normal levels” in summer 2021.

That issue requires additional work by Boeing and is further delaying to the Max’s return to service. — Bloomberg 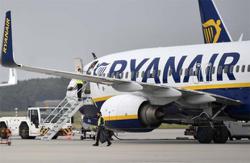 Ryanair to cut 3,000 jobs as the coronavirus crisis drags on