The 25 basis point increase in the Overnight Policy Rate (OPR) will benefit fixed deposit (FD) savers after the real rate of return on deposits will return to positive in 2018.

KUALA LUMPUR: The banks’ capital position remained strong in 2018 and they also continued to record healthy profits in 2018, largely supported by income from financing activities and continued efficiency gains, according to Bank Negara Malaysia.

In its its Financial Stability and Payment Systems Report 2018 issued on Wednesday, it said the “Day 1 impact” from higher provisions under new impairment standards in the Malaysian Financial Reporting Standards (MFRS 9) resulted in lower capital ratios compared to levels in 2016 and 2017.

For the overall banking system, pre-tax profits grew at a slower pace, contributing to slightly lower annual returns on assets and equity.

"The slower profit growth was mainly due to higher provisions set aside by banks with the implementation of MFRS 9 and an increase in interest expenses on deposits, in line with the OPR hike in January.

“The impact from provisions was, however, cushioned by the regulatory reserves28 which banks have been required to maintain since 2010. Financing margin (net of impairment provisions and operating costs) edged marginally higher, with a majority of banks reporting lower costs of operations,” Bank Negara said.

Trading and investment income rose, supported by favourable financial market conditions in the earlier part of the year. 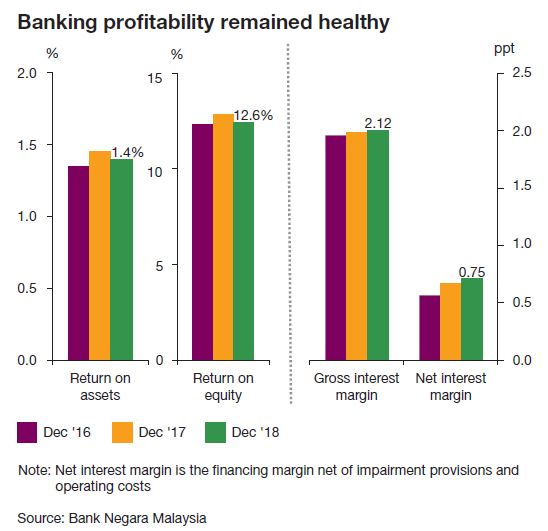 Banks’ asset quality remained sound and at an aggregate level continued to improve with gross and net impaired loans declining in both absolute value and as a share of total loans from the previous year.

Bank Negara pointed out that a closer examination of household loans, however, showed certain segments exhibiting higher incidents of impairment. In particular, impairments of loans for the purchase of higher-valued properties and personal loans have recently been on an increasing trend.

The implementation of responsible financing standards was helping to ensure that newer loans granted  since 2012 were of sound quality, as revealed by the improving vintage of loans granted in more recent years. Banks also continued to be proactive in managing their credit risk.

A number of banks have intensified their monitoring and pre-emptive restructuring of accounts exhibiting signs of temporary repayment difficulties.

Banks were also increasing the rigour of stress tests on exposures to vulnerable sectors and simulating the impact of major global or market events on banks’ asset quality, capital and liquidity buffers. In addition, the loan loss coverage ratio of banks has strengthened further with the implementation of MFRS 9 which calls for a more forward-looking approach to provisioning.

The latest multi-year solvency stress test exercise conducted by Bank Negara continued to affirm the resilience of banks and insurers under simulated scenarios of severe macroeconomic and financial strains.

A significant portion (more than 90%) of the banking system’s losses are driven by credit risk under both adverse scenarios.

Under severe macroeconomic conditions assumed in the adverse scenarios, loan impairments are expected to increase significantly throughout the stress test horizon.

Gross impairment ratios rose up to 8.6%, comparable to the industry’s worst experience in the past decade.

Under Adverse Scenario 2, 56% of the total losses are due to banks’ credit exposures to businesses.  These are mainly driven by selected large NFC borrower groups with weak financial standing prior to the shocks or borrowers in sectors that have been identified as having weaker credit risk outlook.

The remaining losses from businesses are largely attributed to smaller exposures in the general construction and real estate-related sectors.

Over a third of these losses are associated with borrowers earning less than RM5,000 per month.

Credit losses from housing loans account for about a quarter of total household losses. Minimal impact is observed from market risk and external funding shocks.

The impact of contagion risk arising from interbank exposures, an enhancement introduced in this year’s exercise, is also assessed to be limited at 6.3% of total losses. Losses from contagion risks are estimated to be lower if related counterparty exposures are excluded.

Nonetheless, these banks collectively account for only 9.7% of total banking system assets.

Similarly, the insurance sector is expected to remain resilient under stressed conditions with the aggregate CAR of both the life and general insurance sectors remaining above the regulatory minimum throughout the stress test horizon.