PETALING JAYA: Despite inflationary pressure building up, the overnight policy rate (OPR) is expected to be maintained at 3.25% next year if gross domestic product (GDP) growth does not slide below 4%, according to economists.

When contacted by StarBiz, many of them concurred that inflationary pressure would build up but it would unlikely to justify a hike in the OPR. They are projecting inflation to rise by between 1.8% and 2.7% next year.

Much of interest rate hike would be dictated by the need to balance between supporting economic growth and capital outflow pressures apart from the prolonged US-Sino trade war.

The country’s GDP growth for the three months to September came in at an annualised 4.4%, slightly down from 4.5% in the preceding quarter.

The growth moderation represented the fourth consecutive quarter of GDP slowdown – and the slowest pace in two years. 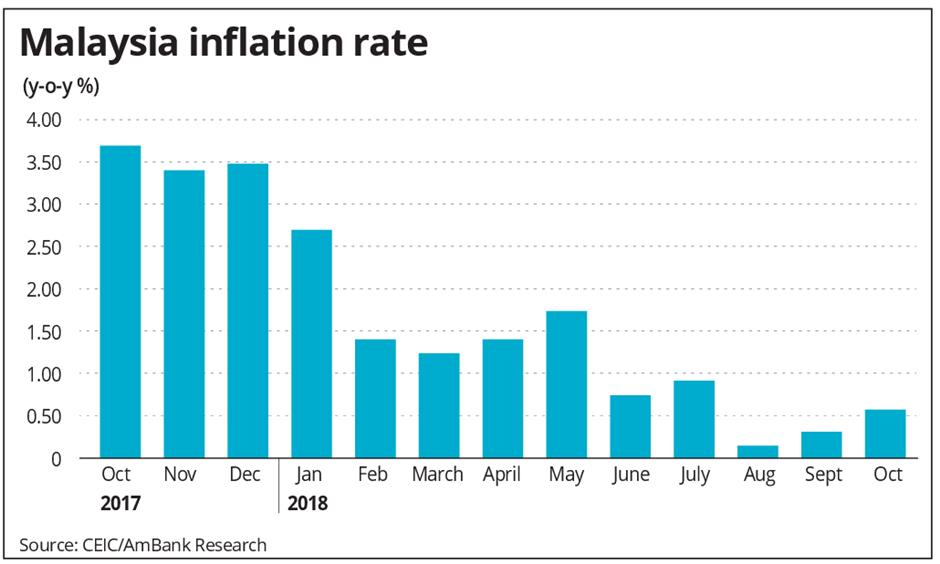 This resulted in Fitch Solutions Macro Research cutting its growth forecast for Malaysia for 2018 and 2019, following a weaker-than-expected performance in the third quarter.

The unit of rating agency Fitch Group expects the country’s GDP to grow at 4.6% this year, compared with its previous forecast of 5.1%. It was also revising its 2019 GDP growth forecast downwards to 4.2% from 4.5% previously.

Headline inflation remained below the 1% level for the fifth straight month with October’s reading at 0.6% year-on-year (y-o-y) bringing the year-to-date average to 1.1 y-o-y.

The OPR was maintained at 3.25% at the last Bank Negara’s Monetary Policy Committee meeting. The last change in the OPR was in January, when the interest rate was raised by 25 basis points (bps).

“We see the possibility of a lower statutory reserve requirement (SRR) (by 50-100 bps ) and/or a lower OPR (by 25 bps) if growth slows more than expected and the ringgit stabilises.

“Given the lower base in 2018, we expect inflationary pressure to build up slightly in 2019. We see upward pressure from the more targeted subsidy policy, i.e. the prospective floating of fuel prices.

“On the flip side, moderating domestic demand as evidenced by the flat growth of the GDP deflator (Q3 18: 0.9%) and lower capacity utilisation in the manufacturing sector will cap inflationary growth,” he said.

GDP deflator is a broader measure of inflation that is not based on a fixed basket of goods and services.

AmBank Group chief economist Anthony Dass, who initially projected a possible 25 bps hike in the second half of next year, said based on the latest data, the OPR would be maintained at the current level.

He premised this on the post US mid-term election that saw Democrats take control of the House of Representatives.

“This suggests the US President’s domestic policies will have to face some stiff challenges which can weigh on the potential growth. The impact from the US-Sino trade war is expected to further eat into 2019 global growth and trade.

“Owing to a slower global growth and trade outlook, it raised concerns on the excess supply of oil that resulted in global crude oil prices plunging.

“Meanwhile, on the domestic side, with inflation rising at a manageable level coupled with GDP growth of 4.5% for 2019, it has allowed us to now maintain the view that the OPR is likely to stay unchanged. Further supporting to our view is that the US Fed could end up raising rates only once if not twice next year instead of three times,” he noted.

The banking group’s 2018 headline inflation is projected at 1.1% in 2018. For 2019, Dass foresee a pick-up in inflation from the impact of consumption tax and the gradual kicking in of the targeted fuel subsidy. Nonetheless, he said inflation would remain manageable, projected to be around 1.8% y-o-y.

The weak ringgit, the implementation of Automatic Price Mechanism for fuel prices in the second quarter of next year, lower base in 2018 and to some degree, the impact of sales and service tax are likely to be the main factor for the gradual rise in inflation rate.

“Our estimates for Malaysia’s Marginal Propensity to Consume (MPC) is about 0.57. This would mean for every RM1 increase in income, Malaysians will spend RM0.57. MPCs in Philippines, Indonesia, Thailand, China and Singapore stands at 0.65, 0.53, 0.45, 0.37 and 0.25 respectively. So clearly MPC in Malaysia is among the highest in this region.

As for OPR, he did not foresee any hike in 2019, due partly to the ongoing US-China trade war and the restrictiveness of the US monetary policy.

“The Federal Reserve is likely to raise the Federal Fund Rate by another 50 to 75 basis points. Eventually, the US economy would slow and this will have a negative repercussion to the global economy.

“We also think the central bank may want to maintain the prevailing OPR level for as long as possible in view of the volatility in the foreign fund flows. This is, especially true when our counterparts in Indonesia, the Philippines and India have raised their policy rates,” he said.