THE contents of the Pakatan Harapan government’s first-ever policy document – the 11th Malaysia Plan (11MP) Mid-Term Review – may not be entirely new or refreshing, but it is certainly a wake-up call on the country’s potential fiscal and economic direction over the next two years.

The document is crafted in line with the government’s aim to be fiscally-responsible, which calls for a more diversified income stream, prudent management of expenditure and above all, the trimming of the RM1 trillion national debt.

The mid-term review plan’s key message is clear: until 2020, the country’s economic growth will rely heavily on the private sector, amid reduced stimulus or investments by the government and a continued slowdown in the domestic economy.

Not only that, the government’s target to achieve a near-balanced budget deficit by 2020 has been abandoned and the aspiration to attain the coveted high-income nation status by the end of the decade has been delayed by four more years.

Unveiled two weeks before the tabling of Budget 2019, the mid-term review document is not all about doom and gloom, however.

Over the next two years, the Pakatan government aims to promote an inclusive and a more equitable Malaysian society. The plan is to empower the bottom 40% (B40) population by enabling a faster and sustainable increase in income for households. Mixed picture: The economic picture is more mixed, the review identifies many of the right challenges including improving human capital and addressing income disparities, and the government is pursuing constructive reforms on these issues, according to Ideas.

The government also wants to address the economic disparity between the rich and the poor, while reducing the development gap between states at the same time.

Considering the widening income gap between the rich, middle class and poor in Malaysia since 2008, as highlighted by Khazanah Research Institute recently, the government’s emphasis on inclusive growth is welcome.

Other efforts in the revised five-year 11MP include enhancing the bumiputra economic community, empowering the minorities and specific target groups, as well as improving the access to quality and affordable housing and healthcare.

Critics have complained that the mid-term review plan is largely similar to the original 11MP devised by the previous Barisan Nasional government, with no major new offerings.

The Institute for Democracy and Economic Affairs (Ideas) questioned the government’s approach to the economy, although the think-tank praised the mid-term review for its important political reforms.

“The mid-term review contains a number of welcome political reforms to improve governance, increase transparency and strengthen key areas such as public procurement.

“The economic picture is more mixed, the review identifies many of the right challenges including improving human capital and addressing income disparities and the government is pursuing constructive reforms on these issues. But in other areas, including on the fiscal side, there are indications that the government is moving in potentially the wrong direction,” says Ideas director of research and development Laurence Todd.

He believes that the high-income nation status could be achieved earlier than 2024, if the domestic economic growth performs better than expected, supported by private expenditure and added with stronger contribution from exports

The mid-term review plan is divided into six pillars, namely:

> To reform governance towards greater transparency and enhance efficiency of public services;

> To enhance inclusive development and wellbeing of the rakyat;

> To enhance environmental sustainability through green growth; and

> To lay the foundation to strengthen economic growth across all sectors of the economy.

Meanwhile, the compensation of employees (CE) to gross domestic product (GDP) is projected to increase to 38% in 2020 from 35.2% in 2017, supported by continuous growth in the salary of employees. The CE basically refers to the total gross payment received by employees for work done and includes wages, salaries and benefits.

It is worth noting that the CE target has been revised downward from the initial target of 40% by 2020 in the earlier 11MP.

Aside from its focus on the country’s socio-economy, the mid-term review has also touched on the need to improve the quality of education delivery.

The mastery of STEM education, or Science, Technology, Engineering and Mathematics, among students will be strengthened, while continued initiatives will be taken to improve the command of English and the national language.

Also, the government aims to encourage more students to pursue education in the field of technical and vocational training.

One of the key concerns that arose in the mid-term review plan is the government’s move to slash development expenditure (devex).

While economists had previously warned the government not to pull the brakes on development spending, the mid-term review saw a RM40bil or 15% cut in devex.

For context, the government’s devex ceiling will be rationalised from the original allocation of RM260bil to RM220bil for the overall plan period, 2016-2020, to consolidate the fiscal position.

Savings from the cost-cutting initiatives, coupled with the country’s higher revenue, will go towards paring down the elevated national debt.

The original 11MP had initially allocated RM260bil for devex for the period of 2016 to 2020, which translates to an average of RM52bil a year. However, the previous Barisan government had, in actual fact, only spent about RM42bil in 2016 and RM44.9bil in 2017 on development spending.

Socio-Economic Research Centre’s (SERC) executive director Lee Heng Guie says that the cut in devex is necessary to account for lower revenue on volatile global crude oil prices and the abolishment of the goods and services tax in 2018.

At an average of RM45.2bil development spending annually, the Pakatan government’s devex would still be slightly higher compared to what its predecessor spent in 2016 and 2017.

Since 2009 after Najib took over the country’s premiership, the yearly allocation for devex has generally been on a downtrend, from RM53.7bil to an estimated RM48bil in 2018, representing a decline of about 10%.

In terms of its share of total budget allocation, the country’s devex in Budget 2009 stood at nearly 26%. However, this has fallen to slightly over 16% in Budget 2018, which was tabled in October last year.

Lee points out that despite the lower spending on development needs, the government’s investment will continue to focus on strengthening public infrastructure and developing economic enablers.

“Over 4,000 ongoing projects will still be continued across the nation, among others, the building of affordable houses, schools, hospitals and roads,” he adds.

In a note issued yesterday, CIMB Research says that devex could be cut by RM1.5bil in the upcoming Budget 2019, while operating expenditure could be reduced by RM5.5bil. The spending cuts could be achieved on the back of tighter procurement procedures, zero-based budgeting, reviews or deferment of infrastructure projects and more targeted subsidies and cash transfers, among others.

What the experts think

An economist says that while the 11MP mid-term review offers many good insights, there are several areas where details are lacking.

“For example, when the government spoke about the need to boost productivity, no specific mechanism or measures were mentioned in the report to push labour productivity. In the previous 11MP tabled by the Barisan government, it was the same case.

“Usually, that is the problem in Malaysia. It looks nice on paper but does not turn out equally well in real implementation. Hopefully, this time around, we will have better strategies to undertake national policies,” he says.

The mid-term review document expects labour productivity in Malaysia to increase to RM88,450 in 2020, up from RM81,268 in 2017. The productivity gap among industries is also anticipated to shrink over the next two years.

The country has seen improvement in labour productivity at an average annual growth rate of 3.7% over the past two years, similar to the 11MP’s original target of 3.7% for the period of 2016 to 2020.

Moving forward, the economist foresees the government having a tough time strengthening its revenue, even if the Brent crude oil price stays at around US$70 per barrel.

One of the reasons, he says, is because the country’s proceeds from the corporate income tax may likely grow slower in pace due to external vulnerabilities and business uncertainties.

In 2017, the corporate income tax was estimated at RM67.82bil, representing about 57% of total proceeds made from direct taxes.

He also recommends the go-vernment to introduce a targeted fuel subsidy mechanism soon, to ensure a more prudent allocation of resources.

“Based on our calculations, for every US$1 increase in the oil price, the government will get an additional revenue of RM390mil, excluding dividends from Petronas.

“However, at the same time, for every additional US$1 in oil price, the cost of subsidy increases by RM680mil under the current blanket subsidy system. Therefore, if the government could reduce the number of recipients by 50% to 60%, it can help reduce the national expenditure,” he says.

Meanwhile, AmBank’s Dass says Malaysia will see a short-term “blip” on its fiscal deficit before reverting to the path of fiscal consolidation.

On the country’s current account that is expected to remain in surplus, Dass calls it a “plus point” for Malaysia.

“We project the current account surplus to be around 2% to 2.5% of GDP over the next two years. Hence, with the economy unlikely to fall into ‘twin’ deficits, the pressure on the ringgit to weaken will be much lesser as opposed to countries with ‘twin’ deficits,” he says.The tabling of the mid-term review is only the first step towards achieving the state of “fiscal responsibleness” that the Pakatan government has envisaged. The bigger question now is whether the ruling government will be able to pull off a better job in managing the public purse and the overall economy, as compared to its predecessor. 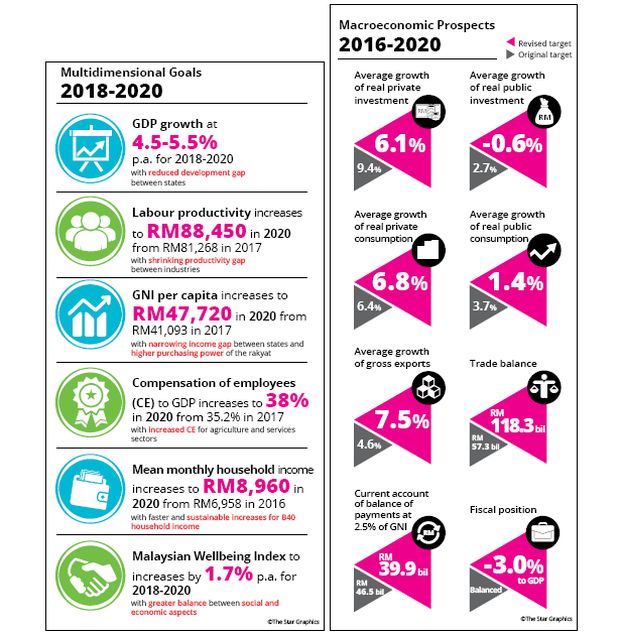