He takes over from Datuk Mohd. Najib Abdullah, who is retiring after 12 years with the group from 2006 until 2018.

Charon is a former investment banker and lawyer. He joined Khazanah Nasional Bhd in 2013 after serving nine years with CIMB Group Holdings Bhd

as deputy CEO and later as the CEO of  CIMB Investment Bank Bhd.

He was also the deputy chief executive, investment banking, CIMB Group and has served in corporate finance at Rashid Hussain Securities and as an advocate and solicitor at Shearn Delamore & Co.

“With decades of experience and a proven track record in serving reputable organisations, Charon has demonstrated throughout his career the ability to work successfully in different environments, designing and leading strategies which resulted in impressive value creation,” it said.

Charon read philosophy, politics and economics at Balliol College, University of Oxford and Law at the School of Oriental and African Studies, University of London.

He is a Chartered Banker and a Fellow of the Asian Institute of Chartered Bankers.  He is a non-practising barrister of the Middle Temple as well as advocate and solicitor of the High Court of Malaya.

“We've selected a capable leader at a time when MIDF Group is in a strong position. We hope you will take pride in being a member of our team,” he said. 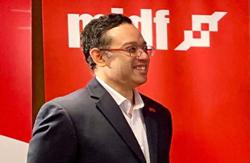 Another round of equity market downturn likely