A WEAKENED ringgit and attractively priced hotel rates are giving tourist arrivals in Penang a boost. The state is seeing increased number in foreign as well as local tourists.

According to statistics from Malaysian Airports Bhd, international arrivals for the period Jan-Aug 2017 rose 8% to 997,627 from 919,506 in the same period last year. Statistics from Penang Port Sdn Bhd also shows an increase in arrivals from international cruise ships for the January-June 2017 period, rising to 172,438 from 114,230 a year earlier.

“We are attracting visitors from Singapore, Indonesia and Thailand.

Ooi says tourist arrivals to Penang are mainly from South-East Asia, east Asia, Australia, the UK, the US and south Asia.

According to the Domestic Tourism Survey 2016 by the Department of Statistic Malaysia, Penang registered the second highest increase of domestic arrivals within the country.

“With the inauguration of Qatar Airways connecting Penang and Doha three times a week starting from Feb 6, 2018 onwards, Penang is forecast to enjoy arrivals from non-traditional European countries such as Austria, Scandinavia as well as the Gulf Cooperation Countries (GCC) and other Middle-Eastern countries,” he adds.

Consequently, occupancy rate of hotels in Penang is expected to improve to about 68% this year for members of the Malaysian Association of Hotels (MAH, Penang Chapter), compared to 63% in 2016, driven largely by domestic tourism.

MAH Penang Chapter chairman Khoo Boo Lim says the uncertainties in the local economy and a weakened ringgit are the reasons that domestic tourism is now about 55% of the tourist arrivals in Penang.

“Domestic tourism used to constitute a smaller percentage, but over the years, it has increased and is now a significant contributor of tourism growth in the state,” says Khoo.

“You get very good five-star facilities and services in Penang at very attractive rates.

“In neighbouring countries, such facilities and services are priced exorbitantly,” he says.

Most of the hotels under MAH are already seeing strong bookings for the forthcoming Christmas and Chinese New Year holidays.

While this gives hotel operators in Penang something to cheer about this festive season, Khoo notes that competition in the hospitality industry has also intensified, particularly due to the growth of the sharing economy.

“The rivalry is coming from the Airbnb, serviced condominiums and homestay segment,” Khoo says.

“Competition from Airbnb and also from other serviced apartments and homestay segments has eroded our market share of the foreign market,” he says.

Chin says domestic guests make up about 70% of the occupancy while foreigners make up the remaining 30%.

According to Chin, one of the reasons that the hotels are getting fewer overseas guests is because newer tourist destinations in Vietnam and Cambodia are drawing foreign visitors away.

“As there is growth in the supply of rooms in the hospitality industry, foreign tourists now have alternative premises to stay in, where the tourism tax is not imposed,” he adds.

“We are now about 70% booked for the Christmas period. We expect to be fully booked as the Christmas holidays draw closer,” Chin says.

Meanwhile, G Hotel communications director Christina Tan says the projected occupancy for G Hotel Gurney and G Hotel Kelawei this year is 83.96% and 73% respectively, compared to 80% and 70% in 2016.

“The recent flood affected tourist arrivals for the first two days because some of the flights could not land at the Penang International Airport. As a result, there were guests who couldn’t reach the hotel.

“But the flood subsided within the next day and business was back to normal,” she says.

According to Tan, despite the weakened ringgit, G Hotel has maintained its pricing.

Most of its business is from the domestic segment.

“The new markets for us are Scandinavia, Indonesia, Middle East, India and China.

“We received a slight drop in the Middle Eastern and European markets because some prefer to go to Phuket, Bali, and Europe,” she adds.

Tan notes that Airbnb is not its direct competitor as the hotel offers full fledge amenities and facilities that Airbnb homes are not offering, including services from bookings to check-ins, food and beverage, five star ambience, housekeeping and follow ups.

“Our target customers are executives and leisure travellers who seek real comfort and pampering experiences,” she adds.

“We look forward to maintain, if not, improve this in the coming financial year barring any unforeseen circumstances,” he says.

According to Saxon, the top foreign markets for the hotel continue to be Australia, the UK, the US, Singapore, Japan, Hong Kong, Germany, Saudi Arabia, China and Thailand, which have registered consistent growth.

“We are fully booked for Christmas and New Year while bookings for Chinese New Year continue to match our growth expectation.

“The domestic segment is a steady complement to the foreign market which forms the majority of our guests.

“The MICE market continues to thrive as evidenced from the fair share of bookings for corporate functions, seminars and wedding banquets that we continue to receive,” Saxon says. 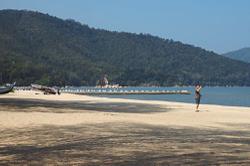