For sale: Durians on sale in Petaling Jaya. Malaysia exported 20,000 tonnes of durians in 2015.

The world loves durians too. CNN newscasters and Hollywood starlets have declared their love for it. Alfred Russell Wallace, the great 19th century naturalist and author of The Malay Archipelago: The land of the orang-utan, and the bird of paradise. A narrative of travel, with studies of man and nature found a Portuguese reference from as early as 1599 to the gloriousness of durian.

Wallace himself was lyrical in his paean to the durian “…(The) pulp is the eatable part, and its consistence and flavour are indescribable. A rich butter-like custard highly flavoured with almonds gives the best general idea of it, but intermingled with it come wafts of flavour that call to mind cream-cheese, onion sauce, brown sherry, and other incongruities. Then there is a rich glutinous smoothness in the pulp which nothing else possesses, but which adds to its delicacy. It is neither acid, nor sweet, nor juicy, yet one feels the want of none of these qualities, for it is perfect as it is. It produces no nausea or other bad effect, and the more you eat of it the less you feel inclined to stop. In fact to eat Durians is a new sensation, worth a voyage to the East to experience.”

Chinese tourists certainly agree. Many tours to Malaysia include a special stop just to eat durian.

Modern technology means that the Chinese need not voyage here for the experience. We can bring durian to them: fresh whole durians (which command the highest price, the Star recently reported a durian being sold in Hong Kong for HK$600 or RM342), frozen whole durians, frozen durian seed pulp, frozen durian seedless pulp, durian paste, or finished products such as durian ice cream and frozen durian mooncake.

Through the efforts of the government and the private sector, our durians and durian products can meet China's food safety standards.

The International Tropical Fruits Network (TFNet), an initiative of the United Nations Food and Agriculture Organisation (FAO) that is based in Selangor, also works closely with the Ministry of Agriculture to help promote durians and other tropical fruit.

The Chinese appetite for durians is huge and growing. In 2015 China imported from Thailand and Malaysia a total of 299 thousand tonnes of durians (US$568 million in value), not including durian paste and other durian products.

This is an amount close to all the durian produced in Malaysia. Durians ranked fourth in terms of China’s fruit imports (after bananas, cherries and grapes) and between 2010 and 2015 Chinese imports of durian increased at a compound annual growth rate of 12% in terms of the weight of all the durians imported and 31% in value.

According to the Department of Agriculture the yield could go up to 13,800 kg per hectare if farms adopted all the practices recommended by the department.

China imports durian at an average price of US$1.90 per kg. If it were only possible for all durian farmers to sell their durian at this price and raise their yields to the level the Department of Agriculture says is achievable, they could make US$26,220 per hectare per year exporting durians to China.

But this unfortunately is not likely.

There are transport costs and there are distributors, wholesalers and other middle-men along the chain who have to be paid. Some durian farms will not be able to achieve the high yields.

The Chinese market has not reached our heights of durian connoisseurship and is obsessed with only the Musang King (D197) variety.

They ignore the 132 other durian varieties registered in the Department of Agriculture’s national crop list, and while true aficionados realise that each variety has its own desirable texture, bouquet and flavour, those who grow these other varieties will, unfortunately, benefit less from a boom in exports to China.

Farmers in developed countries like the Netherlands are well-off as they produce high-quality and high-value items.

A drive around the durian farms of Balik Pulau in Pulau Pinang or a Google search of “Malaysia durian tours” will show that Malaysian durian farmers can have high incomes too if they break into the export market or supply high quality produce locally.

High-income farming does not mean that all farmers should plant Musang King for export to China.

There are other types of durian and tropical fruits to be planted, and domestic and other foreign markets to be served.

The top 10 US fruit imports include bananas, watermelons, papayas, pineapples, and avocados, all of which are tropical fruits. The Chinese top 10 include bananas, guavas, mangoes and mangosteens as well.

We have been given a natural monopoly on tropical fruits. We must use this and make tropical fruit farming a high-income occupation that raises rural incomes and reduces the income and wealth divide between the countryside and the towns.

We have the scientists and agricultural experts who can help us. With the rise of e-commerce, we can sell directly to the foreign consumer without depending on a long chain of wholesalers and distributors. Nothing should stop us now.

Datuk Charon Wardini Mokhzani is the managing director of the Khazanah Research Institute and would like to thank his colleagues for their research for this article.
Article type: metered
User Type: anonymous web
User Status:
Campaign ID: 46
Cxense type: free
User access status: 3 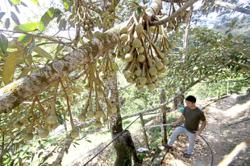