Award winning: Yeoh (left) and Teo explaining the details of internal planning, rendering and modelling of its Lumi Tropicana project.

The company has come a long way from recording earnings of RM17mil in 2011, to RM57mil last year.

Yeoh said the long-term plan for the company is to reach an average revenue of RM500mil annually.

Making a name in the property market with the Lumi series and the affordable Enesta series, Thriven Global’s projects may still be in the early stages, but they are already showing potential.

They are in prime locations with a total gross development value (GDV) of RM1.5bil.

“In the northern region, we are building 300 units for the Desa Aman township, with an additional 600 units of single and double-storey terrace houses and four-storey apartments in the next phase.

“We also have 50 units of shop houses at Bukit Panchor expected to be launched soon,” added Yeoh.

In total, the company’s projects have a total GDV of RM1.8bil.

Strategic expansion is the key when it comes to the remarkable repositioning of Thriven Global.

“Buy your property where there is traffic, that is the rule of thumb,” said Yeoh.

He said the phenomenon of traffic congestion is an important indication of a thriving neighbourhood and the ideal place to ensure sustainable long-term development.

The company’s search for areas with “real industry and real population” was the reason for its decision to pull out from the southern region to focus on the central and northern region. Yeoh said its Enesta series with projects in Kepong and Kedah were created to fulfil its vision of building more quality affordable housing for the people.

He noted that the company’s business model of 60% luxury and 40% affordable development is a promise to return to basics, which is to provide shelter to the people.

Citing its Rumah Mampu Milik project, Yeoh said it has a ballot system whereby no deposit is collected from the prospective buyers.

While it poses a risk as the buyers may cancel the bookings, the company will not penalise them, according to Yeoh.

“If we have integrity clients will come back, not as a single transaction customer, but one who does multiple transactions,” he said.

“Our job is not done after a building is completed. Our question is after a year, does the building have a 70% occupation rate? Is it in good condition after five years?”

The Lumi Tropicana project has recently clinched the Excellence prize for The Best Touch & Feel Award at StarProperty.my 2016.

Thriven Global project senior manager Vincent Teo Kheng Teck said the first phase of Lumi Tropicana, which included two towers and 62 units of Soho, was launched at the end of last year, of which 60% were sold.

“The second phase, which includes another two towers, will be launched by the end of this year,” he added.

The units range from 860 sq ft to over 1,500 sq ft at prices ranging from RM850 per sq ft to RM1,050 per sq ft. The towers named Play, Action, Wellness and Business & Lifestyle have their own unique facilities. Thriven Global plans to bring in a boutique grocer and link the development to the LRT line 3 through the Lien Hoe station.

The project with a GDV of RM770mil is expected to see its first phase ready by 2019, followed by the second phase in 2020. 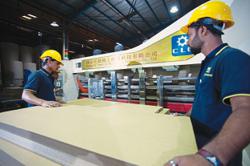