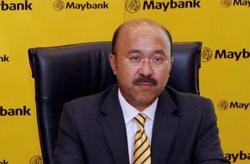 Muzaffar: ‘We have a customer base of about 4.5 million, of which 50 comprises non-Muslims’.

KUALA LUMPUR: Malaysia’s biggest Islamic lender, Maybank Islamic Bhd, says the investment account (IA) business is set to be a game changer for the group in its effort to boost earnings growth amid the subdued banking landscape.

The Islamic lender, which has total assets worth close to RM147bil, will focus on its new mudarabah (profit-sharing) investment fund launched in July last year in view of the Islamic Financial Services Act (IFSA) 2013.

Describing the IA business as “the evolution of the next phase of growth”, Maybank Islamic chief executive officer Datuk Muzaffar Hisham told StarBiz that demand for the IA business has shot up significantly, as the value of its mudarabah fund rose to RM18bil in the last six months of 2015.

“Judging from this figure, we are confident that the fund will continue to grow, underpinned by strong demand from the Muslim and non-Muslim population as well as the benefits it offers.

“We have a customer base of about 4.5 million, of which 50% comprises non-Muslims,” explained Muzaffar.

The value proposition offered by the mudarabah IA is that MayBank Islamic could provide steady returns of between 4% and 5% per year to its customers.

“We are confident that this fund will be a growth driver for us, moving forward,” he added.

He pointed out that “the bank has put in place an effective and robust risk management framework for all of its products, including the new IA, which aims to provide capital preservation, financial security and steady returns through low risk and low to medium-risk investments.”

Under the IFSA 2013, all banks are required to distinguish IA and Islamic deposit. This means that products with mudarabah (profit sharing) or wakalah (agency) features are considered IAs and are not-principal guaranteed and hence not protected by the Malaysia Deposit Insurance Corp.

The classification aims to provide greater legal clarity on the types of syariah financial contracts. Customers will have a choice and will be able to differentiate between products that are principal guaranteed and those which are not that provide potentially higher risk returns like mudarabah.

Besides garnering a pole position in terms of asset size, Maybank Islamic’s market share in the country is also the biggest in terms of financing at 33.6% and deposit at 27.9%.

At group level, Maybank Islamic’s contribution to the Maybank Group is also significant, accounting for close to 30% in revenue and 48.7% in total loans and financing.

Muzaffar said the bank is also looking to grow its Islamic banking business in the region, adding that the business in Singapore and Indonesia each accounted for about 5% of Maybank Islamic’s revenue.

Although Indonesia has the highest Muslim population in the world, he noted that syariah banking was relatively still at its infancy stage unlike commercial banking.

“In Malaysia, it is 25%. Hence, there is plenty of room for growth and we intend to grow and take advantage of this situation,” he added.

According to Muzaffar, the challenge for the bank in venturing overseas will be the regulatory framework, in which Maybank Islamic has to operate in, as well as the uncertainties in the Basel III rules pertaining to its implementation in Islamic finance.

On the corporate investment business, he said it would be dependent on the country’s economic growth, adding that the bank would continue to look at opportunities in the debt and initial public offering markets.

As for its fourth-quarter results, he said Maybank Islamic hopes to maintain its performance in the preceding quarter, although much will be dictated by the external economic environment and market conditions.