In a filing with Bursa Malaysia, the financial services provider said the entitlement basis and issue price of the rights shares would be determined and announced later.

MBSB said on Tuesday that after a series of discussions and negotiations, the financial institution and the shareholders of Bank Muamalat  -- DRB-Hicom Bhd

and Khazanah Nasional Bhd – “have not been able to reach an agreement on the terms and conditions of the proposed merger”.

“Accordingly, the parties have mutually agreed to end all discussions and not proceed with the proposed merger,” it said.

The deadline for the proposed merger between MBSB and Bank Muamalat was on Tuesday.

Last month, MBSB and Bank Muamalat’s parent company had sought a one-month extension to Feb 2 to conclude negotiations but issues of which party would be in control of the combined entity could have broken down talks, say banking sources.

On Oct 1 last year, MBSB announced that it had received the green light from the central bank to begin negotiations with Bank Muamalat and was given a three-month period initially to reach an agreement.

MBSB, a non-bank financial provider, is majority-owned by the Employees Provident Fund (EPF) with a 65% stake.

while Khazanah the remaining 30% stake. 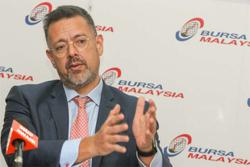