Challenges of a new tax regime

With hundreds of officers under his wing, the jovial-looking Subromaniam is the point man for the Government as it undertakes its most radical tax overhaul since the Independence.

A political hot potato, the impending GST has been a subject matter the Government has skirted around since the days of Datuk Seri Anwar Ibrahim as Finance Minister in the 90s. More than a decade later, Prime Minister Datuk Seri Najib Tun Razak is finally taking the plunge to push forward the controversial flat rate consumption tax which will replace the Sales and Service Tax (SST).

His announcement that the GST would be effective April 1, 2015, had been highly-anticipated during Budget 2014 last October.

It will come during a time when the Government is striving to reduce the country’s fiscal deficit, which shrunk to 3.9% in 2013 compared with 6.6% of Gross Domestic Product (GDP) in 2009.

Malaysia aims to achieve a balanced budget by the end of this decade and the Government views the GST as a long overdue tax reform that will also increase its indirect tax revenue collection.

But the biggest challenge that the Najib administration faces is the perception that the GST will bring about general rise in the prices of goods and services.

Questions about rising prices are something that Subromaniam is continually bombarded with, even from ministers in the Cabinet. 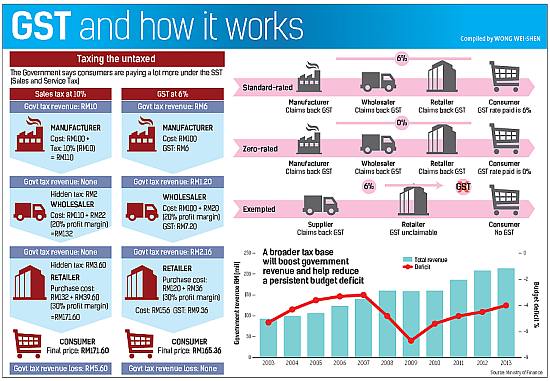 “In theory, we should see a slight reduction for some items where businesses will be able to claim input tax they incurred. I will be very surprised, ceteris paribus, if prices go up,” he tells StarBizWeek.

Teething problems aside, he says the GST regime will stabilise prices in the long-term, with very little price change in most products.

Of course, he says this does not factor in rising or falling commodities prices which affect production costs or shifting market supply and demand conditions.

Finance Ministry officials say that an area that the GST will capture is the shadow economy, a problem which plagues governments around the world as enormous revenue losses are sustained.

Currently, nobody can put a finger on what the total value of the economy that is not being captured under the current tax system is.

However, the ministry’s tax division deputy under secretary MA. Sivanesan says international studies have shown that the shadow economy is between 25% and 30% of Malaysia’s GDP.

He notes that not all of these businesses are operating illegally but also comprise legitimate businesses that are too small.

Sivanesan believes the GST will help shrink the shadow economy as it will benefit businesses to register under the system so they can claim input tax for costs incurred.

“Because of the nature of the input tax claims, the GST regime will serve as an incentive for some of these businesses to come out and register,” he says.

Subromaniam says many consumers are unaware of the current “cascading effect” of the SST, where prices of goods actually contain hidden costs accrued down the supply chain. 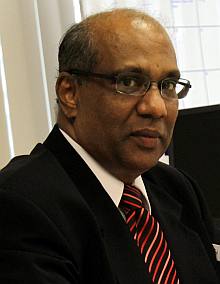 Subromaniam says the GST will stabilise prices in the long- term.

“These hidden costs also result in the Government losing out on collecting indirect tax revenue,” he says.

The GST model will eliminate this cascading effect, he says, with consumers no longer needing to bear the hidden costs.

Subromaniam is also aware of the public’s fears of profiteering from the GST’s implementation and says that the new tax system will be more efficient at addressing such issues.

He says the GST has been structured in such a way that officials will be able to know exactly how much margins businesses are making throughout the supply chain.

“This is because each business needs to list down its input and output GST when it files its returns,” he says.

Subromaniam is proud of the work that Customs has been doing on the GST and is confident that the system will pick up on suspicious margin discrepancies or understated returns.

“Our system is very intelligent. It will issue an alert if anything suspicious is detected. We will then send our auditors to verify what’s happening,” he says.

If the problem turns out to be the understatement of sales or taxes, then Customs, via the GST system, will issue a bill of demand under the Goods and Services Tax Act 2014. 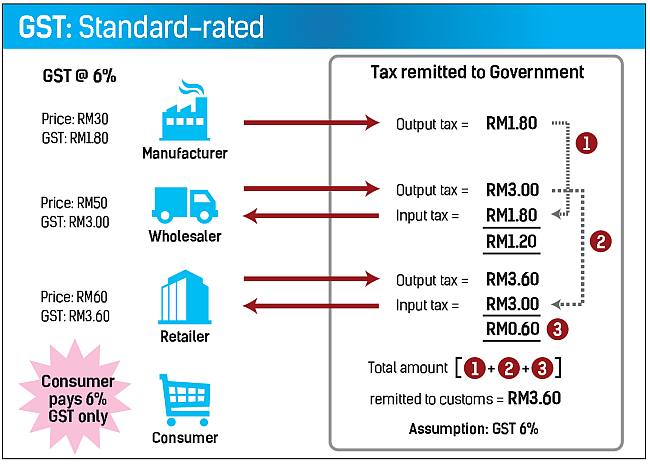 If it is a case of profiteering, he says Customs is working closely with the Domestic Trade, Cooperatives and Consumerism Ministry, who oversees the Price Control and Anti-Profiteering Act.

Consumers can also verify on their own whether the company has the right to charge them GST by checking its GST status on the Customs website at www.gst.customs.gov.my.

Subromaniam says businesses that have registered will have a GST number printed on their receipts. The receipts must also state whether the purchases were subjected to the standard 6% rate or zero rate.

“It is high time consumers start asking questions and learning their rights. The GST will be a game changer in the way we do business and the way we deal with retailers,” he says, adding that it is compulsory for all businesses to issue a receipt.

Apart from expectations of higher costs for goods and services, the other general concern is that the GST will contribute to higher property prices.

This is something that Subromaniam vehemently denies.

Taking the developers to task, he says that assuming there is no change in supply-demand conditions, the net impact is only between 0.5% and 2%. “Developers’ margins are around 30%. This increase can easily absorbed by them, so why are there fears of house prices increasing because of GST?” he asks.

He notes that for property, the biggest cost to developers would be the price of the land, which does not incur GST.

Additionally, he says that under the current SST regime, input costs such as for floor tiles, paint and wall tiles, are subject to a sales tax that could reach 17% to 18% due to the cascading effect.

“Under the GST, there is going to be a purely 6% tax on input items, so there will be some savings there,” he says.

He says the current 6% tax for architectural, legal, consulting and other professional services will remain post-GST implementation, while an additional 6% GST will be levied on materials.

“As for the contractor’s construction services fee, a 6% GST will be imposed. However, if the developer himself does it, then no GST will apply,” he says.

Subromaniam also expresses surprise at claims that the GST will badly hit the private healthcare sector with patients having to bear passed-on costs. In the worst-case scenario, he dismisses the impact as “almost negligible”. “Under the current SST, the hospital rooms, food and accommodation are levied a 6% service tax. They will be taxed 0% under GST,” he says. He adds that tax relief for equipment will also be provided, while additional relief for some medicines are being considered by the Government.

“When we consider all this, some private hospitals would be better off under the GST. In the worst case scenario, the impact would be almost negligible,” he stresses.

With eight months left before the GST kicks into effect, the Government still has a lot of challenges to deal with. One of them is to get businesses to register under the GST system.

However, the Government’s biggest challenge is to promote better understanding, and not just awareness, of exactly what the GST is about to the public.

Generally, the people accept the fact that the new tax system will be implemented despite ongoing resistance from the Opposition.

But many are still confused about what exactly the GST means for consumers and businesses, with this confusion serving as an ideal breeding ground for fears.

The Government must also deal with the view that additional public funds accrued are being mismanaged or wasted, as often highlighted in the annual Auditor-General Report.

The GST system is one that has been embraced by many countries. A lot of thought and time has been put into implementing it here, with Malaysia being praised for its level of preparation internationally.

But for the game changing tax reform to be a true success, the Government must get the buy-in from the people and assuage their fears.

Govt does not expect immediate sharp increase in revenue