EPF: Interest of 13mil members impacted if not allowed to vote on corporate proposals

PETALING JAYA: The Employees Provident Fund (EPF), which is a major shareholder in almost all large-capitalisation stocks on Bursa Malaysia, says it should be allowed to vote in the shareholders’ meetings of the companies in which it has invested.

Deputy chief executive officer of investment Mohamad Nasir Ab Latif said if the pension fund was not allowed to vote in companies, especially when it came to major corporate proposals, then it would have an impact on its duties to protect the interest of the members. 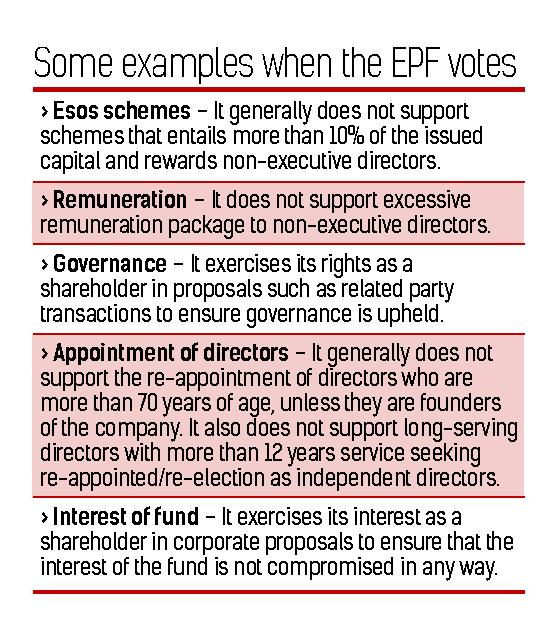 “If we cannot vote, then how can we ensure that the interest of the EPF is taken care of? If a particular (corporate) deal is good, then that’s fine. What if the proposal is not a good deal for the EPF?

“It will impact us and the interest of 13 million members,” he told StarBiz.

The EPF is the biggest participant in Bursa Malaysia, with an estimated RM150bil invested as of now.

Out of its RM600bil fund size, the EPF allocates about 21%, or RM126bil, to the local stock market. The amount tends to increase because the size of the fund grows by between RM30bil and RM50bil every year.

The EPF’s universe of stocks that it invests in comprises about 200 companies. Depending on valuations, there tends to be added weight on the financial and plantation sectors because both are consumer-driven and have done well.

This is why the pension fund has an interest in all the financial institutions in the country and is a major investor in large plantation stocks.

But its sprawling investments in the local stock market thrust the fund into the spotlight when there are merger and acquisition exercises involving these companies.

The latest is the proposed merger between CIMB GROUP HOLDINGS BHD

Because of its interest in all three banks and the fact that it would emerge as the single largest shareholder of the merged entity should the deal be approved, there are suggestions that the EPF should not be allowed to vote in such corporate deals.

However, there is another view that the EPF should be allowed to vote because it is not involved in the day-to-day management of the companies in which it invests.

To this, Nasir said the EPF was not in the business of running companies.

He said the general rule was that in any company where the pension fund had more than 3%, it would vote in certain instances.

“But we vote in instances to ensure that there is proper governance put in place as the business is managed,” he said.

The EPF generally votes when it comes to resolutions such as related party transactions, employee share option schemes and remunerations of non-executive directors.

“We don’t teach companies how to run their business. We don’t get involved in operations,” he said.

Nasir said the same applied to RHB Cap and MBSB where he said it had one nominee director on the boards of each of the financial institutions.

There are several others from the EPF who sit on the boards of many companies. For instance, Nasir himself sits on the board of United Plantations Bhd

“The only communication the EPF has with the nominee directors is market information. It’s information that is known to the market,” said Nasir.