THERE was a time when GD Express Carrier Bhd

(GDex) founder Teong Teck Lean could put a crowd to sleep by talking about his business.

He remembers the moment vividly. “I was presenting at a forum. It was so embarrassing,” he tells StarBizWeek.

The incident turned Teong, who is also managing director and group CEO of express delivery firm GDex, off speaking engagements for a while.

But he’s having the last laugh.

The once-sleepy courier industry is enjoying a revival in interest, thanks to the recent purchase of a 10.35% stake in Singapore Post Ltd (SingPost), GDex’s second-largest shareholder, by Chinese e-commerce giant Alibaba Group Holdings Ltd.

That makes GDex possibly the only Malaysian company to count Alibaba as a shareholder, albeit indirectly.

Its shares jumped to a one-year high of RM2.25 on the news.

Alibaba’s tie-up with a logistics firm could be a prelude to more such deals in the region, says Teong.

“People already know this. Alibaba just did it first. Now they (Alibaba) can say, ‘I book already yeah’.

“The market is moving so quickly that Alibaba decided to buy equity even before firming up a joint venture (with SingPost),” he quips.

Teong says the collaboration between Alibaba and SingPost could have spillover benefits for GDex in terms of higher volumes of parcel deliveries.

Although e-commerce remains largely nascent in much of Asean, Teong believes it is at a tipping point, as retailers in the region increasingly look to sell their wares online.

Trust in electronic payment has also grown substantially, while logistics players have built the infrastructure needed to make express delivery a reliable option.

For GDex, which is ramping up capacity in anticipation of higher volumes, the bulk of its growth will be driven by e-commerce. 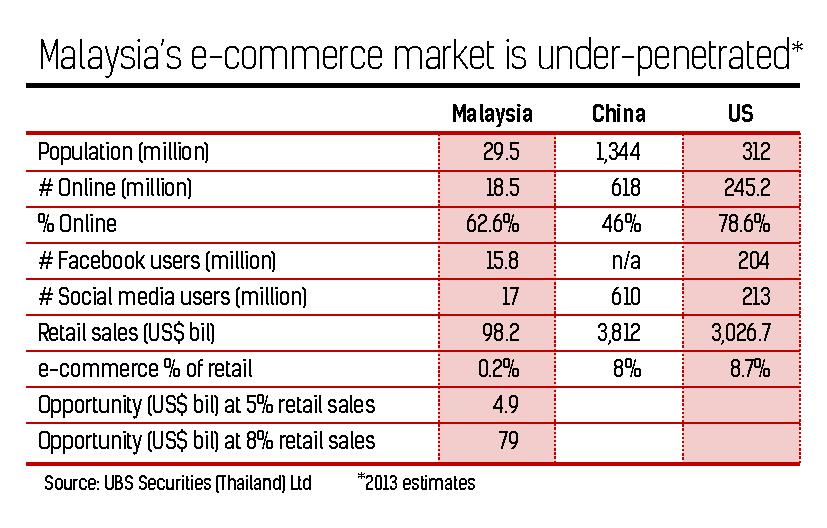 “Going forward, we may grow at a speed that we have not seen before. That goes for the industry as well. The whole logistics supply chain is set to gain.

“China and Europe are relatively mature in their use of e-commerce, but not Asean. The action is here,” Teong explains.

“We believe 2013/2014 is the inflection point for Internet penetration and e-commerce in Asean. The region has reached its ‘mobile moment’, with the majority of traffic coming from mobile devices,” it points out.

In Malaysia alone, some 63% of the population is online, the brokerage’s data suggests, with its e-commerce sales making up only 0.2% of total retail sales of US$98.2bil (RM295.96bil).

The Asean Economic Community (AEC), which takes effect in 2015, will boost online retailing, as trade barriers give way to the free movement of goods and services, according to the research outfit.

“This is driving logistics outsourcing to third-party logistics providers, as is the need for additional warehousing capacity, especially out of key metropolitan areas where there has been a lack of investment.”

Its market capitalisation of RM490mil this time last year has almost quadrupled to RM1.82bil.

GDex was last quoted at RM2.17 on Thursday, giving it a one-year historically-adjusted return of 245%.

That does not appear to have deterred investors.

At Thursday’s close of RM2.17, the stock was trading at a whopping 77.5 times projected earnings, compared to 18.6 times for Pos Malaysia Bhd

With a bigger profile now, GDex is casting its net wider in the Asean region.

It will set up a representative office in Indonesia by year-end, its first foray outside of Malaysia and Singapore.

In the longer term, GDex hopes to establish a presence in every Asean city.

The Indonesian branch will “help us survey and understand how things work before we begin operations,” Teong explains.

“AEC won’t change Asean overnight. But we have to anticipate the opportunities. Growth will be exponential with the free flow in intra-Asean trade.

“Asean has 600 million people. The region is something every logistics player is excited about. To us, it is a matter of execution.”

The group could add between 150 and 200 trucks to its fleet of 500 trucks over the next two years, according to Teong.

GDex will also grow its higher-margin logistics arm, which includes services such as warehousing and freight forwarding.

“Our customers are increasingly outsourcing their logistics needs because they do not see it as a core part of their operations,” Teong explains.

The firm may commit to two or three more warehouses of a similar size to its existing warehouse. It intends to lease the warehouses to stay asset-light.

Its mainstay courier services recorded a pre-tax profit of RM16.12mil on sales of RM113.29mil.

The logistics unit, meanwhile, turned around with a pre-tax profit of RM1.18mil from a loss of RM191,000 a year ago. Revenue rose almost five times to RM3.82mil, translating into a pre-tax margin of 31%.

“The logistics arm has a small cost base. Margins should normalise once it gets larger,” Teong quips.

GDex hasn’t raised its courier charges since 2000, although customers pay fuel and handling fees to offset the effects of inflation, he says.

Cost efficiencies have helped GDex cap its fee increase to 30% over the past 14 years, even though its cost of diesel and wages are up 400%.

Its delivery turnaround time is benchmarked against international standards, with successful next-day delivery of 85%, versus the local industry average of 70%.

On SingPost, which has a 26% stake in GDex, Teong says they enjoy a good working relationship.

The Temasek-owned postal services group emerged as a substantial shareholder of GDex in March 2011.

Teong remains the firm’s single-largest shareholder with a 42.1% holding.

Their collaboration, however, has not extended beyond GDex providing last-mile delivery services for SingPost in Malaysia.