KUALA LUMPUR: The management company of Country Heights Grower Scheme (CHGS), Plentiful Gold-Class Bhd has handed over RM208mil to the trustees of the now defunct scheme.

“This puts growers at the receiving end of a total payout of RM319mil as opposed to RM189.5mil raised by the scheme,” said Lee at a press conference on Tuesday.

The company said this is in compliance with the voluntary termination as approved by 98.89% of the participants of the scheme.

The trustees are now tasked to refund the monies to some 10,000 growers in the scheme.

CHGS was Malaysia's first oil palm farm-sharing scheme that provided the opportunity to the subscribers to participate in the palm oil industry in Malaysia.

Plentiful Gold-Class in the last five years had paid a total return of 48%, consisting of a rate of return of 8% per annum for the first three years and 12% over the subsequent two years.

With the additional RM25mil goodwill payment together with the full refund of the grower's fee pursuant to the termination of the scheme, the growers are set to collectively receive a total of RM319mil.

This is compared to the total funds raised at RM215.5mil when the scheme was first launched in 2007. 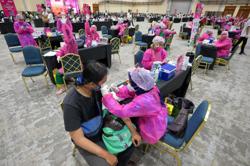