I do. He could take a lesson on discipline from her. She has only squash on her mind and she does her training with a clear mind.

Our boys are not to be blamed. I always blame the management, who give them the leeway to act that way (lack of discipline). BAM (Badminton Association of Malaysia) has done the right thing by employing a part-time or full-time training director responsible for the development of the high-level team. The results are already showing based on the Commonwealth Games. I’m hopeful for the same at the Asian Games.

You have done much for the development of sports in the country. Can you relate a project that could have been a success but failed? Bulbir Singh, Seremban

We have failed to produce follow-up players who can replace people like Lee Chong Wei. We always think of the champions and give them all the rewards. But this needs to change as we need to keep producing good players to succeed the champs who retire.

What was your golden moment? What would you advise the future generation of badminton players? Nicky Chan Kah Poh, Penang

The best moment of my playing days was winning the Commonwealth Games gold medal for Malaysia in 1974, at the Christchurch Stadium, New Zealand. This may be a surprise as many would expect me to say it was winning the All England doubles title with Ng Boon Bee.

But winning Malaysia’s only gold medal from badminton gave me the best satisfaction. I was also able to fulfil my greatest ambition of having won the men’s singles and doubles titles for all the three games we represented Malaysia in. (There was no Olympics as it was only introduced in 1992.)

Advice to the young – please note there is a way to financial gains in badminton too as proven by Lee Chong Wei who lives comfortably now given his winnings and endorsements. Always give your best and you will not be disappointed. Self-discipline, dedication and determination to succeed should be utmost in your mind. Another important factor is encouraging parents.

I am what I am due to my father. He even used to bet against me in a match and hit me to discourage me from playing another sport. He did this because he believed in me, that I would succeed one day.

What do you think of the Malaysian government’s intention to have each student involved in at least one type of sports by next year? Tabitha CC Boi, Penang

It is an important step. It is a massive exercise. Imagine the number of coaches this programme will need to ensure that each school has a competent teacher. It is a start of something better to come.

Who is the world’s most skilful badminton player now? How would you rate this player against former greats of your era, say, Rudy Hartono? Yeap Boo Yam, Selangor

I would rather not compare today’s players with those of the past. We are from two different worlds. We did not have colour TV then. In fact, TV was a luxury. We cycled to play.

Now the fathers bring their sons or daughters in a car or the person drives to the venue.

Who did you get inspiration from while in the court? James N, Selangor

I used to play singles and doubles initially as they were so few of us playing the game at the top level.

After the 1972 incident in Kenya when I was playing with Tan Aik Huang in the finals, I had collapsed in the second game after having won the first. I was diagnosed as having a small lung (half the size of a regular one). I then gave up singles and concentrated on doubles as I have won nearly all the titles in the world partnering Boon Bee. I have never lost a game after that with Boon Bee.

I retired from active badminton as a player after the All England. I entered the singles finals of All England against my good friend Rudy Hartono and nearly beat him – 8-15,15-11,15-12. I modelled my game to that of Dane Finn Koberro (he won international titles from the mid-50s to 60s) who used his wrist to his advantage.

These days, how do you keep fit? Biskebu Tee, Bandar Utama, KL

I went for a heart by-pass operation three years ago. I then retired from all forms of sports activities. I am careful about what I eat and do regular exercises.

Are athletes today driven by the glitz and glamour of the sport rather than for love of the game? Back then, players got a simple pat on the back for their efforts. Today, they’re showered with all sorts of rewards – cash, land, house, etc. Eugenie Devan, Bangsar

You are absolutely right. But it is not their fault as we live in a world these days with endorsements and so forth.

“For the love of the game” is slowly disappearing from most sports events.

Badminton is a physical game, but it also involves lots of intelligence and strategy. Do you think our players today lack these? And what are the key attributes to being a successful sportsperson? Ahmad Majid, Malacca

As for the second question, sincerity is key to a stable career. You need to be vigilant against any chances.

If you change something of the current badminton training regime in our country, what would it be? Kamal Hassan, Kedah

I can say a lot of things about the training. But remember, I am considered old by the authorities. What I would do is change the coaches around to give the players a fresh start. It is important to rotate the coaches as after some time, familiarity breeds contempt.

Comedian HARITH ISKANDER has never failed to keep his fans in stitches of laughter at countless live performances in Malaysia as well as many parts of Asia for over a decade. He is also an accomplished director, actor and writer. The entertainer has embarked on two new adventures – he got married and more recently, has opened up a restaurant in the suburbs. Any questions for him? Email 10questions@thestar.com.my 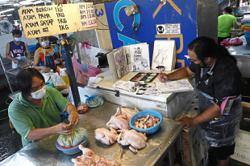