AFTER almost four decades of operating fromits “territory” in Subang Jaya, Taylor'sEducation Group is expanding beyond itsnucleus to Sri Hartamas in Kuala Lumpur.

The education group, which was founded in1969, has been expanding aggressively throughout the area surrounding its maincampus Subang Jaya to include four additional campuses.

The new campus is the first to be set up outside the Subang Jaya vicinity.

“Although Subang Jaya has been our hub formany years, we are running out of space there. The changing times coupled with Taylor's own growth has resulted in the investment in the new campus. 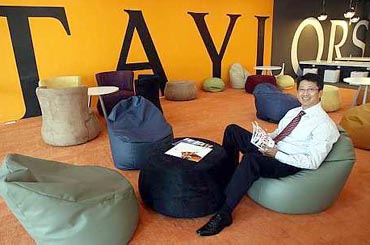 “It is a two-pronged strategy. We will beable to cater to students living in this part of the city as well as have a nice and spacious location for our new campus,” Loy told StarBiz.

Loy explained that the land belongs toMalaysia Land Properties Sdn Bhd (Mayland)and the group was renting it from the company.

“Sri Hartamas is not too far from our hub inSubang Jaya and we can manage it easily. Weare very optimistic with this campus,” he said.

Currently, Taylor's University College SriHartamas campus can cater to about 800 students for the Cambridge A-Levels programme.

It will be able to take in more students once all three floors of the campus are ready.

The entire campus is also Wi-Fi enabled to allow students to use digital technology as learning tools.

“The new campus is planned to meet theincreasing education demands of our studentenrolment which has increased year-onyear,”Loy said, adding that the campus providedan alternative for those living aroundthe vicinity.

“As one of Malaysia's oldest, most successful and reputable private institutions of higher education, we are proud to announce that over 50,000 graduates have passed through our doors. This campus will continue our productheritage of academic as well as teaching andlearning excellence,” he said.

Loy expects the medical school to be up andrunning a year from now once it has receivedall the necessary approval from theGovernment.

He said the medical school would be situatedat its Lakeside Campus in Subang Jaya.

The Lakeside Campus is currently under construction and expected to be ready in early 2010.

“Overseas students contribute 14% to ourrevenue, but there is no urgent need to expand elsewhere yet,” Loy said.

He said Taylor's main priority was to ensureteaching excellence thus prompting the groupto invest about 4% of salary into staff training compared with the 1% recommended by the Government.

However, Loy added that Taylor's has beenon the lookout for opportunities to expandbeyond the Klang Valley and even Malaysiabut such plans would take time.