This will include 54 flights involving 13,000 passengers between Malaysia and Saudi Arabia.

“This is our 10-year projection,” he said after the agreement signing ceremony. 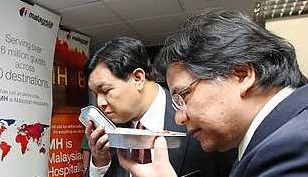 Declining to reveal how much the airline would make from the charter flights, Nik Ahmad said MAS was not “totally profit-oriented” on these flights. “Suffice to say both parties are satisfied.”

Executive director and chief financial officer Tengku Azmil Zahruddin said for the first time ever, direct flights would also operate between the Sultan Mahmud Airport in Kuala Terengganu and Jeddah.

The other locations are from Kuala Lumpur, Penang, Johor Baru, Kuching and Kota Kinabalu.

He declined to disclose what was considered an acceptable price level for both oil and jet fuel. “ We would prefer prices to be lower but as it is, we have to live with it,” he told StarBiz.

As at 5.47pm local time yesterday, oil was traded at US$119.67, up more than US$1, a recovery from a three-month low registered in the previous trading session.

Jet fuel, meanwhile, was traded at about US$141 per barrel.