Most have fallen below offer price in tandem with weak sentiment

KUALA LUMPUR: Most of the initial public offerings (IPOs) that debuted on Bursa Malaysia in the first half year have fallen below their offer price in tandem with the softer market conditions.

The biggest loser is business productivity solutions provider TFP Solutions Bhd, which closed at 12.5 sen, slipping more than 60% from its offer price ex-bonus of 32 sen per share.

A research report had deemed TFP as a “pricey IPO” as the shares were tagged at 10.1 times price-to-earnings (PE) of financial year ending Dec 31, 2008 (FY08) compared with the market’s PE average of eight times.

The brokerage had put a fair value of 28 sen, valuing the stock at 8.8 times PE, or 10% above local market average.

TFP plans to expand into other Asean countries such as Thailand, Vietnam and Indonesia, as well as seek acquisition opportunities to widen its product offerings.

Meanwhile, rubber player Hartalega Holdings Bhd was a promising IPO given its status as the country’s largest nitrile gloves producer.

“Underpinned by the positive industry outlook, we believe Hartalega would register strong double-digit earnings growth in the next two years,” the research had said in its IPO report.

Innity, an online advertising provider, ended 8.6% lower against the issue price ex-bonus of 28.9 sen on its debut listing on Monday. Yesterday the shares fell further to close at 24 sen. 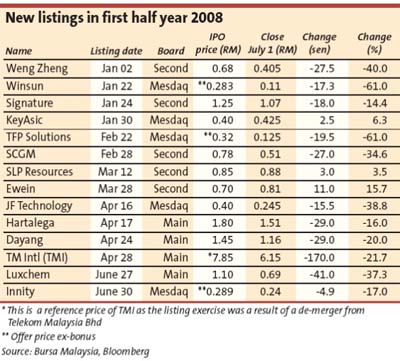 Based on its estimated EPS of 3.57 sen for FY08, the IPO was priced at about eight times PE.

According to a head of research, the poor performance of some of the new IPOs was due to the weak sentiment in the market.

He said valuations were currently compressed and this affected the new listings.

“At the time of listing, brokerages were expecting the KL Composite Index to touch 1,300 points. Now, even a forecast of 1,200 points is considered too optimistic,” he said.

The research head added that the less liquid counters would be affected more due to the greater risk seen.

There are three new listings, nonetheless, that have managed to stay above the water since their debut.

Chip design company KeyAsic Bhd’s share price has appreciated over 7% since its listing in January. The value is supported by good earnings in the first quarter ended March 31.

It made a net profit of RM6.4mil on revenue of RM25.8mil. It has aimed to achieve RM31mil in net profit for the current financial year.

Shares in Ewein Bhd grew 16% in value since its debut less than four months ago.