Business partners Steven Tan and Kenneth Kuan, have been in the glove-making industry over the last five years. In the first of a new series Young Persons to Watch, appearing every Saturday, they talked to YEOW POOILING on how they started the business, their opinions of each other, as well as their vision for the company.

WORKING hand in glove – that is the recipe for success for businessmen Steven Tan and Kenneth Kuan.

Partners for the last five years, Tan, 39, and Kuan, 28, have combined their strengths to bring out the best in their glove-making business.

It was Tan who founded Excel Century Gloves Sdn Bhd, and six months into the venture, he had roped in Kuan to help manage the financial aspects of the business.

“I was general manager of one of the subsidiaries in the Kuok group from 1998 to 2000, and I was responsible for the setting up of the plant, production as well as sales and marketing activities,” Tan said.

The glove-making factory ceased operations in 2000 and Tan decided it was time to venture out on his own. Given the resilient demand for gloves and his 12 years of experience in the industry, as well as the strong relationship with suppliers and buyers, it was only natural that he set up his own glove-trading company.

“I met Kenneth during the restructuring exercise at the factory I was managing and we shared the same opinion that the glove industry has tremendous potential,” Tan said.

Describing himself as the “technical guy” after having been trained as an engineer, he felt Kuan would complement him with his financial background.

“I find Kenneth a very suitable partner when it comes to financial issues. He has good contacts within the financial sector. By combining his expertise and mine, we get a strong partnership.”

“Furthermore, Kuan being younger is an advantage, as I may need to look after the person if my partner is much older than me”, Tan said.

“Our personalities are also similar except that I’m a shuttler and he’s a bowler.”

There has been no looking back for these two entrepreneurs. Today, Excel has the capacity to produce some 168 million gloves per year and this is expected to increase to 262 million, when the third line commences operations next month.

“I believe our key success in glove-making is that we are able to maintain the durability and strength of the gloves,” Tan said.

He said the efficiency was a result of technology advancement and skills of the workers. To date, there are over 30 staff members working in the factory in Johor.

One of the biggest hurdles faced was in the area of sourcing for funds.

“We are considered new in the industry, which sees us as a child. Banks want to look at track record and performance and only time will prove our capabilities,” Kuan said.

Tan agreed, adding that he usually left the sourcing of funds to Kuan.

So, what is the difference between being an employee and becoming your own boss?

“Well, I had a monthly paid job with no risk when I was working for somebody else. But now that I'm my own boss, I have to consider the level of risk in every decision that I make. I cannot afford to fail because the stakes are higher now. I have to double my efforts in managing the business,” Tan said.

He pointed out that the attitude of an employer was also different from that of an employee. An employee would say, “If I don't work here, I can always work elsewhere” but an employer would have to persist in the business.

He added that the most encouraging part of owning this business was seeing the fruit of his labour. “It feels like seeing the birth of my own child.” 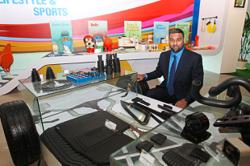