Quality education is the hallmark of Inti 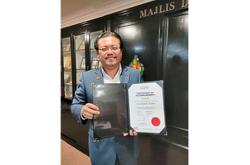 INTI Universal Holdings Bhd’s emphasis on quality education is best portrayed in the motto “Quality, the essence of Inti” adopted by its education arm, Inti International Group of Colleges.

This soon led to the establishment of Inti College Malaysia, its main campus in Bandar Baru Nilai, Negri Sembilan, in April 1998. And in 2000, Inti opened its fifth Malaysian campus, Inti International College Penang.

In its quest for expansion, the group also set its sights outside the country’s borders. Inti currently has international branches and franchise centres in Thailand, Indonesia, Beijing, and Hong Kong.

To cater to the increase in student population, chief executive officer Tan Yew Sing said the group would be relocating its existing campus in Subang Jaya to a larger built-up area for academic, corporate training, professional, and other evening courses.

The maximum capacity of the campus upon completion in 2006, will be 6,000 students with accommodation for 1,000.

The group will also be constructing a new campus in Kuching, in which phase one catering to 3,000 students and accommodation for 1,000, is expected to be completed in mid-2005. Estimated financing requirement for phase one is about RM12mil.

“We will also be investing RM20mil for five years (2002 to 2006) in our e-campus project which incorporates three key web initiatives, e-learning, Inti Smart Card System and Total Campus Management System,” Tan said, adding that currently only its Nilai and Subang Jaya campuses were full e-campuses.

Inti gears up for expansion abroad