A member of a military bomb squad walks in a blast suit after securing a mock explosive device during an anti-terror drill at Kuala Namu International Airport in Deli Serving, North Sumatra, Indonesia on Dec 8, 2022. - AP

* Freedom of speech guaranteed, but within legal limits, says Fahmi

* Minimum wage could rise to 800 baht a day if Pheu Thai elected: Thaksin

* THAI resumes Sapporo flights amid increase in travellers to Japan

* Elderly farmers set up charity health clinic in Can Tho

* Banking on human resources and reform to boost digital technology

* Over 37.55 million people vaccinated for Covid-19 in Myanmar 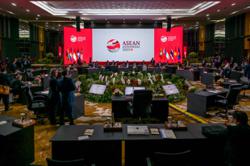