A woman casts her fishing line in the water filled with garbage and oily wastes in Banda Aceh port on Aug 1, 2022 - AFP

BANGKOK (Bernama):- The Asia and the Pacific region accounts for over 55 per cent of global greenhouse gas emissions, an increase of about 20 per cent between 2010 and 2022.

In a statement, United Nations Economic and Social Commission for Asia and the Pacific (Escap) said the region also sees the most rapid and serious decline in biodiversity-related ecosystem services.

"The region is responsible for 81 per cent of global ocean plastics and nearly 90 per cent of its population regularly breathe air considered by the World Health Organization (WHO) to be unsafe.

"This is compounded by rapid urbanisation trends, with over half of its population living in cities and urban areas,” it said.

Escap said only 24 countries in the region recognise the right to a healthy environment in their constitutional provisions and 17 countries still do not have any constitutional or legal recognition of this right.

"Furthermore, despite a series of announcements from countries to reach net zero emissions by mid-century, current ambitions as set out in nationally determined contributions fall short of what is needed to reach the Paris Agreement targets,” it said.

Today, the Asia-Pacific countries renewed commitments to boost regional cooperation in climate action and sustainable urban development to achieve the common goal of a healthy environment.

Ministers and high-level officials from Asia-Pacific countries also agreed to ramp up protection of ecosystems and oceans, and to implement environmental rights principles to achieve the goal.

The ministerial declaration on "Protecting our planet through regional cooperation and solidarity in Asia and the Pacific” was endorsed at the close of the seventh session of the Committee on Environment and Development convened this week by Escap.

"The challenges are serious, but I believe that the Asia-Pacific region has great potential to show leadership in building a sustainable future by building on our strong scientific and technological capacity,” said United Nations Under-Secretary-General and Executive Secretary of Escap Armida Salsiah Alisjahbana.

"We need to act in unison through multilateralism,” he said. 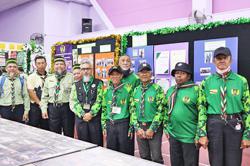