Ng Kok Wai faces one charge of housebreaking for climbing over the balcony of the victim's cabin and then entering her cabin to commit theft. - ILLUSTRATION/AFP

SINGAPORE (The Straits Times/Asia News Network): A Singaporean man who was on board a Bahamas-flagged cruise ship on the high seas when he allegedly broke into another passenger's cabin and stole a bra has failed in a preliminary legal challenge against the charges he faces.

Ng Kok Wai, 29, had argued that he cannot be tried or held criminally liable by the Singapore courts because he was on a foreign ship outside Singapore when the acts were allegedly committed.

These arguments were rejected by a district judge.

District Judge Kow Keng Siong said that when a crime has been committed on a cruise ship operating from Singapore involving Singapore citizens and residents, Singapore's criminal law must have the ability to bring the perpetrator to justice.

In a written judgment published on Wednesday (Oct 5), Judge Kow said Ng's legal position was inconsistent with the plain wording of provisions in the Merchant Shipping Act, created a dangerous and unnecessary gap in the law, and undermined public and national interests.

The judge said Ng can be tried in the Singapore courts and convicted if the elements of the charges are proved, but whether the accused is in fact guilty of the charges remains to be determined.

Ng faces one charge of housebreaking for climbing over the balcony of the victim's cabin and then entering her cabin to commit theft.

He also faces a charge of theft for stealing the victim's bra and a piece of her luggage.

These offences under the Penal Code, on their own, do not apply to crimes committed on a foreign ship on the high seas.

However, the prosecution relied on the Merchant Shipping Act as the legal basis to prosecute Ng.

Ng, who was represented by Ryan David Lim, contested the charges.

It was agreed that the legal issue - whether the Act has the effect of extending Singapore's criminal law to extraterritorial acts committed on foreign ships - should be determined before proceeding with his trial.

In the course of arguments, a question arose over which provision under the Act should have been used.

The prosecution said it chose section 180 as it extended Singapore criminal law to extraterritorial acts, and also conferred jurisdiction on the Singapore courts to try the charges.

But Judge Kow said section 178 ought to be stated as the applicable provision.

The case was adjourned for parties to consider their next course of action. 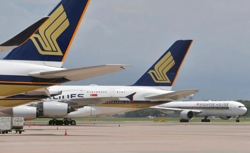