MANILA, Oct. 3 (Xinhua) -- The positivity rate of Covid-19 in the Philippine capital region is "very high" at 19.1 percent, a health expert has warned citing official data.

Guido David, a professor at the University of the Philippines and OCTA Research fellow, said the rate is much higher than the World Health Organization's benchmark of 5 per cent.

"We're noticing a continued uptick in the positivity rate, and so infections are still increasing in Metro Manila and provinces around it," he said.

The positivity rate is the percentage of people who test positive for the virus of those who have been tested. The key rate hit a record high at 47.9 percent in January this year.

The Philippines reported 1,967 new Covid-19 infections on Monday (Oct 3), bringing the number of confirmed cases in the South-East Asian country to 3,955,758.

The Department of Health said the number of active cases dropped to 28,111, while 29 more patients died from Covid-19 complications, pushing the country's death toll to 63,042.

The Philippines reported its highest Covid-19 single-day tally of 39,004 new cases on Jan. 15. The country, with a population of around 110 million, has fully vaccinated over 73.1 million people. - Xinhua 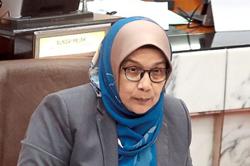