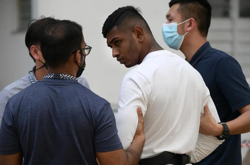 For more than a year, a technician sexually abused and raped his daughter, who was between 10 and 11, in her bedroom until he was caught red-handed by his wife.

It took another four months before a police report was made by the victim with the help of an uncle who learnt of her ordeal.

The 40-year-old father was sentenced to 20 years’ jail and ordered to be given 12 strokes of the cane by the High Court after he pleaded guilty to a charge of aggravated statutory rape and three charges of sexual exploitation of a child.

Another six charges of sexual exploitation were taken into consideration during sentencing yesterday.

He cannot be named owing to a gag order to protect the victim’s identity.

The man performed sexual acts on her between August and September 2019, touching her twice a month, when she was 10.

After realising he could get away with it, he became emboldened and increased the frequency and severity of his acts.

After September 2019, he sexually abused his daughter about once a week.

When the victim turned 11, his acts escalated.

Once, in the midst of a sex act, he quickly returned to his bedroom to check that his wife was still sleeping.

When he was satisfied that she was, he returned to the victim’s bedroom, and continued assaulting her.

He stopped only when his wife woke up, went to their daughter’s bedroom and saw him on top of her.

When his wife asked him what he was doing, he lied that the victim had a nightmare, and he was covering her with a blanket.

The girl told her mother that her father had touched her inappropriately many times. — The Straits Times/ANN