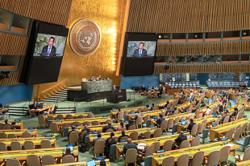 PHNOM PENH, Sept 24 (Phnom Penh Post/ANN): Prime Minister Hun Sen addressed the 77th UN General Assembly (UNGA) in the early hours of Saturday, highlighting global challenges exacerbated by the escalation of armed conflicts and superpower rivalry, among others, while urging world leaders to adopt a balanced approach to the pressing issues based on multilateralism.

"The escalation of the hostilities involving more and more actors... coupled with the threat of a nuclear war have serious impacts on the world at large," he said, while also noting that the contentious Taiwan issue and nuclear tests on the Korean Peninsula remain a concern, in the Asian region and beyond.

He urged all stakeholders to adhere to the fundamental principles of the UN Charters and international laws.

On concerted efforts in the fight against the pandemic, Hun Sen said a resilient, sustainable national health system, built through the coordination of the World Health Organisation (WHO), is warranted to prevent a recurrence of the health crisis.

"An open and transparent multilateral engagement in the distribution of vaccines, driven by a true principle of shared responsibility, is the only way to prepare for and prevent future pandemics," he said, stressing that the transfer of technologies in vaccine research and development is key to achieving the common goal of a strong global health system.

On climate change, which he said is deteriorating due to further loss of biodiversity, land degradation and a growing scarcity of fresh water globally, the premier urged mitigation-oriented efforts to promote climate-resilient development.

"Our commitment to lowering the global temperature by 1.5 degree Celsius requires dedicated climate financing and technology transfer to facilitate meaningful transition in mitigation and adaptation efforts," he said.

On economic front, Hun Sen urged the upholding of rules-based multilateral trading system with the coordination of the World Trade Organisation (WTO), particularly in the face of trade and economic decoupling induced by Sino-US rivalry.

He urged greater attention to inclusive digital policies and conducive regulatory frameworks to narrow the growing gap and create new sources of growth.

On regional security, Hun Sen said Cambodia, as the chair of Asean this year, is committed to addressing pressing issues based on the spirits of ASEAN centrality, unity and solidarity.

He reaffirmed the Kingdom's commitment to helping Myanmar resolve its ongoing crisis as the conflict has direct implications on the stability of the whole region.

He said Cambodia will continue to spearhead efforts aiming for the cessation of violence, delivery of humanitarian assistance and a compromise through inclusive political dialogue based on the Asean 5-Point Consensus.

In his closing remarks, Hun Sen highlighted the Kingdom's remarkable progress and achievements in cooperation with the UN on peacekeeping and other missions, the most recent of which is the rendering of justice to the victims of the Khmer Rouge genocidal regime though the upholding of life sentence against former Khmer Rouge head of state Khieu Samphan by the hybrid tribunal.

"I take this moment to express appreciation to all donors for providing support budget and to Cambodian compatriots for their cooperation in consolidating national reconciliation process," he said. - Phnom Penh Post/ANN