JAKARTA (The Jakarta Post/Asia News Network): A political tour carried out by Indonesian Democratic Party of Struggle (PDI-P) executive Puan Maharani in recent days is expected to change the political map ahead of the 2024 presidential election, as the nation’s largest party seeks coalition partners to extend its rule beyond the reign of President Joko 'Jokowi' Widodo.

In her latest stop on her political trip, at the private residence of Gerindra Party leader and presidential nominee Prabowo Subianto in Hambalang, West Java, on Sunday (Sept 4), Puan broached the possibility of forming an alliance with the nation’s second-largest party, a political manoeuvre that analysts say could be game changing for the 2024 election.

Puan, the first woman to serve as House of Representatives speaker and the clear political heir of the Sukarno clan within the PDI-P, made clear that she did not rule out the possibility of being paired with Prabowo in the race for the country’s top job.

“I think the possibility is there — there is nothing impossible in politics if it is for the advancement of the nation,” she told reporters after the meeting.

Prabowo, the only presidential hopeful to have secured enough support to contest the upcoming election after Gerindra formally declared its alliance with the National Awakening Party (PKB), shared the same sentiment.

“Anything is possible if it’s for the good of the nation.” Hambalang was the second high-profile visit made by Puan after her meeting with NasDem Party leader Surya Paloh at the NasDem Tower in Jakarta last month.

Despite being a pro-government party, NasDem is poised to work with the opposition parties to back the nomination of Jakarta Governor Anies Baswedan in the upcoming presidential race.

Analysts have said that party alliances for 2024 would centre on three figures who have consistently topped political surveys: Prabowo, Anies and Central Governor Ganjar Pranowo, with whom Puan competed for her party’s presidential nomination.

A potential pairing of Puan with either Prabowo or Anies could shut the door for Ganjar, a PDI-P politician, to contest the election, turning it into a two-horse race. It is, however, too early to draw conclusions from the Hambalang meeting.

As the country’s top two parties, a PDI-P-Gerindra coalition would result in a political partnership that controls over 35 per cent of the seats at the House of Representatives.

Political analysts, however, are skeptical that political talks between the two parties will run smoothly, as both parties eye the presidential seat.

“With the PDI-P having more [legislative] seats, the party will seek to nominate its member as the presidential hopeful, while Prabowo is also insistent on nominating himself. It will take more than just Sunday’s meeting for a coalition to happen,” KedaiKOPI executive director Kunto Adi Wibowo told The Jakarta Post on Monday.

While the elites of the two parties have continued to maintain a good relationship over the past years, Kunto said that supporters of each party do not see eye-to-eye, considering the bitterly polarising elections that pitted the two parties against each other in 2014 and 2019.

The PKB could be another obstacle to the PDI-P-Gerindra coalition, said Firman Noor of the National Research and Innovation Agency (BRIN), citing the Muslim-based party’s insistence on pairing its chairman, Muhaimin Iskandar, with Prabowo.

“Even if the PDI-P was fine with nominating Puan as Prabowo’s vice president, that could only happen if the PKB lets go of that position,” Firman said.

A more likely option, experts said, was for the PDI-P to join the United Indonesia Coalition (KIB) – consisting of the Golkar Party, the National Mandate Party (PAN) and the United Development Party (PPP) – which has yet to settle on a single presidential candidate.

“I think the KIB coalition will be more open to accepting the PDI-P, since all three KIB parties have yet to be firm on their preferred candidate. They have also previously said that they are open to accepting more parties [into the coalition],” said Noory Okthariza of the Centre for Strategic and International Studies (CSIS).

“[For the PDI-P] to win the presidential election [...] they need as many partners as they can get, so it is also in their best interest to partner up with as many parties as they can,” said Adi Prayitno of Parameter Politik Indonesia.

Forming a coalition would also help the party to boost its influence in the House after the 2024 legislative elections.

“It will be useless if the PDI-P wins the election but is only a minority in the House of Representatives. That’s what happened during Jokowi’s first election win in 2014, and he could not do anything because of [a lack of support] in the House,” he said.

BRIN’s Firman also said that garnering more support from other political parties through a coalition would help to guarantee the PDI-P a higher chance of winning the election.

“This is particularly true since Puan, with her low electability, would really need that support,” Firman said.

Opinion polls over the past few months have consistently put Puan’s electability far below top-dog presidential contenders such as Prabowo, Anies and Ganjar, even though her popularity had slightly increased, according to several surveys. 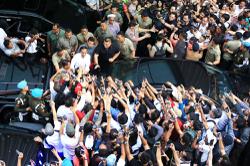