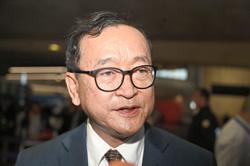 Lawyer Jessica Finelle (left) walks with her client Cambodian opponent in exile and leader of the Cambodia National Rescue Party (CNRP) Sam Rainsy (L), as they arrive at the court house accused in a defamation lawsuit filed by Cambodia's prime minister, in Paris on September 1, 2022. Longstanding Cambodian opposition figure Sam Rainsy face a French court on September 1, 2022, in defamation cases brought against him by top officials in his home country. Rainsy, 73, was targeted with two separate complaints by Cambodian Prime Minister Hun Sen and his son-in-law and deputy national police chief, Dy Vichea, over Facebook posts dating back to 2019. - AFP

PARIS, Sept 3, 2022 (AFP): Veteran Cambodian opposition figure Sam Rainsy went on trial in France on Thursday (Sept 1) in defamation cases brought against him by the prime minister and a top police official of his home country.

The France-based Rainsy, 73, is accused in relation to two separate complaints filed by Cambodian Prime Minister Hun Sen and his son-in-law and deputy national police chief, Dy Vichea, over Facebook posts dating back to 2019.

Hun Sen contests Rainsy's allegation that he was behind the 2008 death in a helicopter crash of national police chief Hok Lundy, who was Dy Vichea's father.

The leader of Cambodia's government "decided to murder Hok Lundy because he knew too much about Hun Sen's misdeeds", he added.

The hearing was expected to last just the single day, with judges then retiring to issue a verdict within weeks.

Entering the court, Rainsy told AFP that he expected "true justice" from France.

He told the court in French that Cambodia was currently a country with "no freedom of expression, where all those who want to tell the truth end up dead, in prison or in exile".

"I would like to help put an end to this culture of violence and impunity," he added, describing "Facebook as "my only window of expression".

But Luc Brossollet, a lawyer representing both top Cambodian officials, argued that the allegations on Facebook were defamatory.

"Whether you are an opponent or not, there is a certain line that you cannot cross and that is the one of the truth," he said.

"The things that form the factual basis of Sam Rainsy's accusations are hopelessly empty and grotesque and do not constitute evidence of the serious accusations we are examining," he said.

But defence lawyer Jessica Finelle told AFP that judges ought to "recognise that it is in the public interest for Sam Rainsy to denounce crimes committed by Hun Sen within a dictatorship".

Her client "has been persecuted for 30 years by Hun Sen. The only weapon remaining to him is freedom of expression, to testify about what he has experienced and condemn what political opponents and human rights defenders are suffering in Cambodia", she said.

Rainsy was one of the founders of the Cambodia National Rescue Party, the South-East Asian nation's main opposition movement.

He spent years fighting Hun Sen -- who has ruled for the past 37 years -- before seeking refuge in 2015 in France, where he is a dual national.

Rainsy is the target of many court cases in Cambodia, where he says he is being persecuted for political reasons.

The government there accused him of an attempted coup when he sought to return in 2019.

"In his home country, Sam Rainsy is the victim of a slew of trials, the regime is trying to muzzle him," said another of his lawyers, Mathias Chichportich.

The French tribunal should "enshrine Sam Rainsy's right to express his political struggle" and "exonerate him", he added.

"His words are founded on a solid factual basis."

Although Rainsy's party performed strongly in the 2013 elections, it was dissolved four years later.

In 2018, Hun Sen's movement swept every seat in Cambodia's parliament, a result that was fiercely contested.

Since then, increasing numbers of dissidents have been arrested and prosecuted.

Dozens of opposition figures were sentenced in a mass trial in June, with Rainsy receiving an eight-year prison sentence in his absence.

He has already been jailed in absentia for terms of 25 and 10 years for trying to topple Hun Sen, who is expected to run again in new elections next July. - AFP 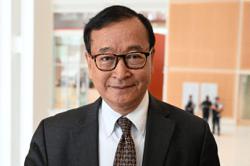