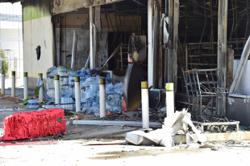 BANGKOK (The Nation/Asia News Network): A charred body was found on Wednesday (Aug 17) as officials were investigating a burned down 7-Eleven convenience store at the PTT gas station in Pasemat subdistrict, Su-ngai Kolok district, Narathiwat.

The body was identified as Masarich Mama, 26, a local who had reportedly visited the store on Tuesday night.

The convenience store was one of 17 locations of coordinated bomb and arson attacks by insurgents in Yala, Pattani and Narathiwat on Tuesday night and early on Wednesday.

Witnesses at several locations reportedly said assailants had ordered all staff and customers to leave buildings before these were set on fire.

Officials speculated the deceased was trying to escape via the back exit while attackers had not seen him, but the door was locked and he was therefore trapped in the burning store.

On Wednesday Fourth Army Area deputy chief Maj-General Pramote Phrom-in said the attacks were aimed at destroying the atmosphere of peace talks and discrediting the authority of the government.

He was referring to the latest round of peace talks with insurgent leaders on Aug 1 and 2, which had failed to reach any breakthrough.

Later that evening, Kasturi Mahkota, president of G5, a militant group under the Patani United Liberation Organisation (PULO), insisted the PULO was not involved in any of the attacks. He said he had no idea who was behind them.

He also rejected a rumour that the PULO had organised the attacks in revenge after G5 local leaders were apprehended by security officers. 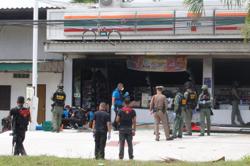