Rescue workers search after a flash flooding caused by a sudden downpour triggered mudslides in Datong county on Aug 18, 2022. - AFP

The deluge comes during a summer of soaring temperatures and torrential rains in China, with multiple cities clocking their hottest days on record and floods causing hundreds of millions of dollars worth of damage.

"As of noon on the 18th, 16 people have been killed," added CCTV, saying that rescue work was ongoing.

At least 18 people are missing and 20 have since been rescued, and a "frontline headquarters" has been set up to organise the emergency response, according to state media reports.

"The rescue work is progressing in an orderly manner," the report said, adding that sudden heavy rainfall Wednesday night had triggered the situation.

Scientists say extreme weather across the world has become more frequent due to climate change, and will likely grow more intense as temperatures rise.

Severe flooding in southern China in June displaced more than half a million people and caused an estimated $250 million in damage.

On Wednesday, Chinese authorities warned that heavy rains were also expected to hit northern regions of the country including the capital Beijing and its neighbouring Tianjin and Hebei.

Meanwhile, millions of people in southwest China are facing rolling power cuts after a crushing heatwave led to an electricity supply crunch that has forced factories to halt work.

Sichuan province relies heavily on dams to generate its electricity but the heat has caused reservoirs to dry up, exacerbating the energy shortage.

On Thursday, Sichuan authorities ordered employers to stop requiring staff to perform outdoor work when temperatures are forecast to hit 40 degrees Celsius or above.

Water volume in the province's major rivers has fallen by around 20 to 50 per cent in the absence of rain as well, impacting hydropower generation, state news agency Xinhua reported Wednesday citing provincial energy officials.

The China Meteorological Administration said the country was going through its longest period of sustained high temperatures since records began in 1961, with 64 straight days of heat warnings in various regions starting in June.

More than a third of weather stations in China recorded extreme heat this summer, with 262 of them reaching or surpassing previous records, the administration said. 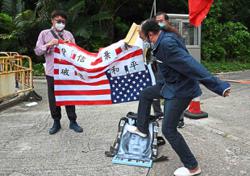