The SCDF were alerted to the second fire at Block 236 Jurong East at about 5am on Aug 17. - LIANHE ZAOBAO

SINGAPORE (The Straits Times/Asia News Network): A fire broke out again in a ninth-storey flat in Jurong East on Wednesday morning (Aug 17), a day after it was engulfed in flames.

According to a statement by the Singapore Civil Defence Force (SCDF), it was alerted to the second fire at Block 236 Jurong East Street 21 at about 5am on Wednesday.

It was found that the fire started in one of the bedrooms, likely reignited by deep-seated embers within the rubble. Firefighters used a water jet to extinguish the flames.

There were no reported injuries from this second fire in the flat.

On Tuesday, a 48-year-old man died after the unit caught fire. Another person who lived in the flat managed to escape before firefighters arrived.

Three residents from a neighbouring flat had to be rescued by firefighters, after clutter along the common corridor left by owners of the affected unit caught fire, blocking their exit path.

One of the three neighbours rescued from the blaze, a 56-year-old information technology analyst who wanted to be known only as Sunil, claimed that the owners of the affected unit had a habit of leaving items, such as household appliances and bags, in the common corridor.

Three water jets and a special platform ladder were used by firefighters, who wore breathing apparatus sets, to fight the first blaze. The fire was fully extinguished in about five hours.

Damping-down operations, involving the application of water to burnt surfaces to prevent potential rekindling of fires, were conducted for about eight hours after the fire was extinguished, the SCDF said then. 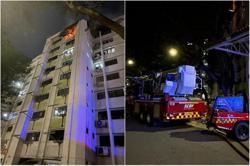