PHNOM PENH (The Phnom Penh Post/Asia News Network): Bosba Panh is just 25 years old, but she’s already accomplished some impressive milestones for herself and the Kingdom.

On July 24, she graduated with a Master’s degree from the University of Cambridge as the first Khmer woman composer and Khmer music graduate ever at the school.

She considers her graduation to be merely the first necessary steps before setting off on her journey, an important part of which will be finding new ways to promote Cambodian arts and encourage academic or intellectual engagement with the arts by Cambodians in other parts of the world.

Music has always been in Bosba’s veins and the more she’s become involved with it, the clearer her purpose in life and what she is meant to do for Cambodia and Khmer people has become.

Known for her singing talents as early as 7, Bosba has now become a composer with a prestigious college degree to prove it. She wants to demonstrate to the world that Cambodia has multiple aspects to it that go beyond the typical narratives about the Kingdom dealing with war and misfortune.

After her graduation following nine intense months of studying for her Master’s degree to become the first Khmer woman composer, she points out to The Post that there were at least two other Cambodian composers before her – Ung Chinary and Him Sophy – whom she respects greatly and were both male.

“First, I should say I feel proud to be both Khmer and the first composer to come from such a prominent university. On the other hand, I have mixed feelings about my pride in that because I shouldn’t be the only Khmer person, there should be other people at other schools who are also Khmer graduating with the same or similar degrees, so it’s a mixture of pride and knowing that we have a lot of work left to do,” she says.

Her success has had a positive impact and opened the minds of Cambodians who have heard her story and can now know that such successes are possible, especially as woman are often still limited by the mindset that girls should be married at a young age and begin having children rather than continuing to study.

Behind that, there are the people she feels truly blessed to have had in her life who always believed in her even at her lowest point: Her parents, Ung Chinary and all of her teachers.

“I have a lot of pride as a Cambodian because my parents have always reminded me of my roots as a Cambodian. And Ung Chinary is almost like my second father in terms of my music career. He’s the one that spoke to my parents about sending me to music school when he first met me at the age of 14. And I have always gone back to him for advice when I’m questioning my path or when sometimes people were not very nice to me in school because I’m Khmer.

“I have met so many good teachers in my life – at the Royal University of Fine Arts [RUFA] in Phnom Penh and in America in Boston. They all have had so much belief in me. Now that I am 25, I’ve realised that having good teachers gave me the confidence I needed,” she says.

In her journey from singer to composer, she says that when she was 18 she decided to ask herself questions about her direction musically. She liked singing but also wanted to show people that Cambodian culture deserves to be studied and that there should be Khmer studies programmes and more time and resources invested in the scholarly aspects of Cambodian culture, which led her to studying composition.

In order to earn her Master’s degree in composition, she was required to write a dissertation, which she titled Articulating Khmerness: Khmer Agency in Western Art Music, which aims to answer the question “how do I write classical high-art music in Europe while still staying true to my Cambodian identity?”

“Sometimes I was just asking myself am I still Khmer if I’m singing this music that is not Cambodian? It’s a really hard question and other people have never really given me an answer to it, so that’s why I wrote my dissertation on that,” she says.

In her dissertation, her goal was to contextualise the articulation of Khmerness in western music and find cultural agency within a globalised music industry which legitimises the consumption of the cultural other.

“This work is intended for music practitioners and scholars, particularly composers who find themselves lost between the field’s expectations and their authentic self. I hope that fellow trans-cultural composers will better understand their sense of displacement and be encouraged to develop a version of cultural literacy they feel is most aligned with their own agency,” she writes in her dissertation.

Bosba says that each person’s identity comes from within, and to discover their true identity, they shouldn’t rely on western education completely, noting that such an education will give them the tools to decide who they are as Cambodians.

“Many people who have read my dissertation may decide not to go study in the west because they think they don’t want to be influenced. That’s not the point. The education there just gives you a different perspective on how to approach music and how to play music and how to listen to the world,” she tells The Post.

She says the most honest label for her music would be to call it Khmer-European.

“Because that’s who I am as a person by my studies and also who I am as a Khmer woman. In the music itself, I dedicated my efforts to writing about my identity and where I’m from. Even though it’s not obviously about Cambodia, I try to always have a link to it and try to think about who I am. Am I writing music that is like me or am I trying to write music that copies western music?” she stresses.

Although she loves and enjoys the job of coordinating and executing the marketing and promotional strategies for Hal Leonard Europe’s Choral and Classical catalogue across the UK and European markets, when asked if this is something she wants to continue to do as her career, she says she isn’t sure yet.

“I love the company. I think I’ve met people who care about what I do and they value me as a person. But I would probably need another year to decide if I want to continue doing this job because I love it or if I want to continue with academics. I don’t know ... Maybe I can find other ways to promote our arts,” she tells The Post.

In terms of promoting Cambodian arts, Bosba says she is more interested in doing so on an intellectual level by promoting writing about Khmer music and making sure that it’s also available in Khmer, as she hopes her dissertation one day will be.

“If you propose an idea and the only people who debate with you are western people, you’re not giving Khmer the same opportunity to have their arguments included in the debate. It always feels good to be recognised in the world but it’s just as important to be recognised in your community.

“I also want my papers to be available in Khmer. In the long term, I want to be in the position to have the time and the money to be able to translate everything into Khmer,” she says.

She says she has thought of completing her studies with a doctoral degree, but it’s really hard to find the right PhD programme.

“I am always interested in promoting Cambodian arts and I don’t want to graduate from the PhD programme and suddenly not want to do that anymore. So that’s why I think it’s very important for me to find a good programme to be at with people who believe in me. I want to have a positive impact for Cambodia and for the world to take Cambodian music seriously,” she says. 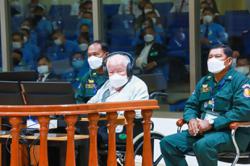