Dancers perform during a cultural event at the end of the Super Garuda Shield joint military exercise in Martapura, South Sumatra. US and Indonesian soldiers were joined in the two-week exercise by forces from Australia and Singapore -- as well as Japan, which is participating for the first time in the annual drills. - AFP

* A day to pay tribute to lefthanders of the world * Almost all Indonesians have antibodies against Covid-19, blood survey shows

* Thailand: Chinese gambling kingpin, on the run from cops since 2012, taken into custody in Bangkok

* Superpowers to meet in S-E Asia * Cambodia warns of rainwater flooding in some provinces next week * Why is ‘invincible Gangnam’ prone to flooding?

* Taiwan drills: PLA sends in extra troops to back up Eastern Theatre Command 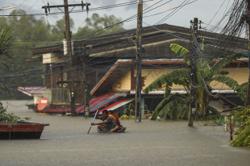