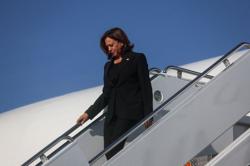 TOKYO (Bloomberg): Japanese Prime Minister Fumio Kishida replaced the female minister in charge of tackling the country’s falling birthrate and installed a man who sought to deepen his understanding of the issue by trying out a "pregnancy belly.”

Kishida reshuffled his cabinet Wednesday (Aug 10)and named former Bank of Japan official Masanobu Ogura (pic), 41, to take over the post from ruling party veteran Seiko Noda, a mother of one.

In an interview with the Associated Press last month, she blamed a male-dominated political world for "indifference and ignorance” toward a plunging birthrate that has become an increasingly serious threat to its economy.

Ogura, who is married with no children, tried out a "pregnancy belly” in a project organised by the youth division of the ruling Liberal Democratic Party in April last year.

Kishida told a news conference he mobilised a "young and fresh perspective” to address the problem of a declining population in appointing Ogura.

Ogura said at a news conference after being named to the post that the enhancement of policies helping families raise children is an urgent task, the Kyoiku newspaper reported. He added "the moment of truth is now,” it said.

Ogura and two other male lawmakers were to keep the 7.3 kg (16 pound) pregnancy bellies on while going about their daily routines, in order to understand the burden on the body of carrying a child, the Sankei newspaper reported at the time. The suit, worn strapped to the torso, is meant to simulate the weight gain at the seven-month point of a pregnancy, according to Ogura’s blog.

He explained in the blog that he had experienced back pain while wearing the jacket and found himself worrying about other passengers on a crowded train bumping up against him.

"This doesn’t mean I have more meaningful opinions about policy than other people,” he said. "But I certainly now feel I want to dedicate more of my limited time as a lawmaker to supporting pregnant women.”

A record low of 811,604 babies were born last year, according to health ministry data, while deaths climbed to a postwar high of 1.44 million.

The shrinking working-age population is being forced to support a growing number of people aged 65 and above, who made up more than 29% of the population as of September. Already low levels of immigration have been further hampered by strict border measures during the pandemic.

With Ogura’s appointment, only two women are set to be part of Kishida’s new cabinet -- Sanae Takaichi as Minister for Economic Security and Education Minister Keiko Nagaoka. Digital Minister Karen Makishima was also replaced by a man, Taro Kono.

In the interview with the AP, outgoing minister Noda said politicians often paid lip service to gender inequality, adding the country’s politics won’t move unless the problems of women and children are made visible.