History repeats itself: Protesters walking through Yangon with umbrellas bearing in Burmese the number 8 during a rally to mark the anniversary of the Aug 8, 1988 democracy uprising against a previous junta. — AFP

UN investigators said there was mounting evidence of crimes being committed in Myanmar, including since a military coup last year.

The United Nations’ Independent Investigative Mechanism for Myanmar (IIMM) said it had gathered lots of evidence of violations as well as elements indicating the most serious international crimes.

“The Mechanism has collected a significant amount of information items, including videos, photographs and documents potentially indicative of crimes against humanity and war crimes committed across Myanmar by various individuals since February 2021,” a report said.

The junta has waged a bloody crackdown on dissent.

“Perpetrators of these crimes need to know that they cannot continue to act with impunity,” IIMM chief Nicholas Koumjian said.

“We are collecting and preserving the evidence so that they will one day be held to account.”

The IIMM was established by the UN Human Rights Council in September 2018 to collect evidence of the most serious international crimes and violations of international law and prepare files for criminal prosecution committed since 2011.

Located in Geneva, it started work in August 2019 and reports annually to the Human Rights Council and the UN General Assembly. — AFP 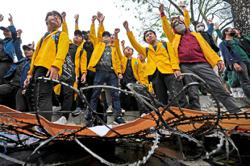