MEDAN (The Jakarta Post): The North Sumatra Police have arrested two people, including an underage person, for allegedly igniting fires that have contributed to the ongoing forest-and-bush blaze around Lake Toba tourism areas in the province for the past few weeks.

Police spokesperson Sr Comr Hadi Wahyudi said that a 62-year-old suspect identified only by the initials PS was arrested in Siogungogung in Pangururan district, Samosir and a 14-year-old was arrested in Sianjur Mulamula also in Samosir regency.

“PS was arrested for igniting fire to clear land to plant corn, while the teenager said he was told by his high-school teacher to burn a pile of trash. Both fires caught wind and burned nearby woods,” Hadi said on Monday (Aug 8), explaining that both suspects were arrested for questioning.

“The fire has covered a 40-hectare area. We have yet to be able to extinguish it,” he said,

Last week, a wildfire burned at least 10 ha of forests and vegetation in Simalungun and Samosir regencies, with suspicions that the blaze was started by land-clearing activities for agricultural plantations.

Last month, one person was killed when fire erupted in the Lake Toba tourist area in Muara district, North Tapanuli regency. The fire burned through at least 50ha of land in the mountainous region, with local authorities also experiencing difficulties in containing it.

The fire claimed the life of local resident Natal Simaremare, 50, whose charred remains were found in Sitanggor village.

Witnesses told police that Natal had been killed when he slipped while battling the flames. 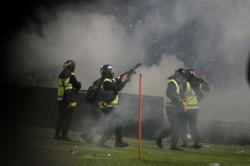