AN expert virologist has warned people that getting a Covid-19 infection does not mean they will not get infected again.

In a Facebook post on Sunday, Dr Yong Poovorawan said most people are at risk of reinfection within three months after recovering, though some former patients were reinfected after just two months.

He was citing the Chulalongkorn University’s Centre of Excellence in Clinical Virology study on 40 people who were infected a second time.

The study covered reinfected patients with mild symptoms as well as those with severe symptoms, though most had mild symptoms. Patients who had been prescribed the antiviral Favipiravir during their first infection received symptomatic treatment in the second round.

He added that no patients developed severe symptoms or a lower than normal oxygen level.

Dr Yong said he believes immunity derived from vaccines and previous infections kept the symptoms mild. Also, he said, many people got vaccinated after their first infection, and this also reduced the severity of the second infection.

Covid-19 is like other respiratory diseases, which means recovered patients can get infected again after three months so they should receive a booster when appropriate, he said. — The Nation/ANN 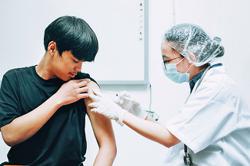