A Singapore's Air Force Chinook helicopter escorted by Apache helicopters parade with the flag of Singapore to mark the country's 57th National Day, in Singapore on Aug 9, 2022. - AFP

* Cops seize drugs worth over RM1mil, six arrested in KL

* No tax defaulters among expats in Malaysia, says Immigration DG

* Saravanan: First group of Bangladeshi workers to be employed in manufacturing sector

* Thai PM Prayut to stay in power another 2 years, his deputy says

* One eatery closed so far in Bangkok crackdown on safety violations

* At a Jakarta crosswalk, Indonesian teens take to the catwalk

* Being gay is not a disease, Vietnam tells medical workers

* Mounting proof of crimes against humanity in Myanmar: UN probe

* Concern in Cambodia as orders for garments wind down

* Tokyo breaks record for severe heat days in a year

* Tourists trapped in 'China's Hawaii' over Covid to start leaving 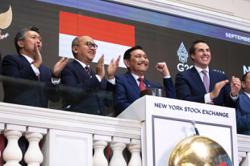