Members of the Jambi Police attend a call of readiness ceremony at the police's headquarters in Jambi city. - Jakarta Post/ANN

JAKARTA, July 26 (Jakarta Post/ANN): The Jambi Police are deploying 330 officers on Wednesday (July 27) to secure the planned second autopsy of one of their own, Brig. Nopryansyah Yosua Hutabarat, who was reportedly killed in a shootout at the Jakarta residence of a high-ranking police official.

“The entire process will be well-guarded so that everything can go peacefully and smoothly,” said Jambi Police spokesperson Sr. Comr. Mulia Prianto as quoted by Tempo.

Yosua’s body was buried in his hometown in Sungai Bahar, Muaro Jambi regency.

After concluding a preliminary probe on Friday, the National Police started a full investigation into allegations made by Yosua's family that his death had been the result of premeditated murder.

A team was formed comprising personnel from the Criminal Investigation Department (Bareskrim) and General Supervision Inspectorate (Irwasum), among other units, which will be aided externally by the National Commission on Human Rights (Komnas HAM) and the National Police Commission (Kompolnas).

Investigators have yet to reveal the evidence that prompted their investigation, nor have they named a suspect in the case. The formal investigation into premeditated murder started a day after President Joko “Jokowi” Widodo once again called for a thorough and transparent probe.

Yosua was reportedly killed in a shootout with Second Agent (Bharada) E on July 8 at the residence of the police's internal-affairs chief, Insp. Gen. Ferdy Sambo, in Duren Tiga, South Jakarta.

Yosua and E had been on duty at the residence as a chauffeur to Ferdy’s wife and Ferdy’s personal secretary, respectively. According to the previous police account of the incident, E confronted Yosua after hearing screams coming from the bedroom of Ferdy's wife, who claimed Yosua had tried to assault her.

Police said Yosua drew his firearm first and fired at E, triggering a gunfight between the two that left Yosua dead. Before the incident, Yosua had escorted Ferdy's family on a trip from Magelang, Central Java, to Jakarta.

Yosua's family, however, challenged this account, suspecting that his death had been premeditated given the many lacerations and bruises they claimed to have found on his body. 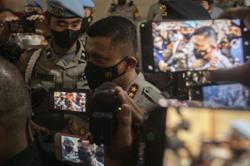