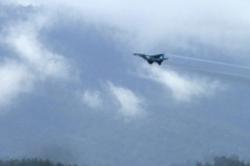 Image from The Nation Thailand/ANN.

YANGON, July 3 (The Nation Thailand/ANN): Thailand is gearing up for an influx of Karen refugees as the Myanmar army continues bombing Karen villages in the border town of Myawaddy.

The injured have been sent across to Tak’s Phop Phra district for treatment.

Of those killed, one held a Thai ID card, the second a card of hilltribe people and the third a 10-year stay permit.

Refugees, meanwhile, have been streaming across the border, and as of press time, the number of people seeking shelter at the Ban Muen Rue Thai community had swollen to 255.

Prayut, who also doubles as the defence minister, has called on people to have faith that the Thai Army will successfully protect national sovereignty, adding the incident was “no big deal”.

The Myanmar military has been pounding Karen villages just across the Thai border since noon on Thursday, throwing people living on the Thai side into a panic. - The Nation Thailand/ANN