As Asean mulls its options on Myanmar, don't lose sight of shifting military balance in the country 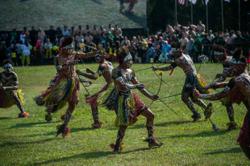 YANGON/PHNOM PENH, July 12 (The Straits Times/ANN): Junta chief Min Aung Hlaing has been shut out of Asean summits since he staged a military coup last year and declared himself prime minister.

Questions are looming larger these days over whether he will continue to be barred, or if it even matters anymore, with China's foreign minister Wang Yi giving a not-too-subtle nod to the junta with his first trip to Myanmar since the coup.

The chief Chinese diplomat kicks off his tour to South-east Asia by attending the Lancang-Mekong Cooperation foreign ministers' meeting in Bagan on Monday (July 4), alongside his counterparts from Thailand, Cambodia, Laos and Vietnam.

Meanwhile, Asean special envoy Prak Sokhonn on Thursday received Chinese Covid-19 vaccines for an Asean programme slammed for putting humanitarian aid in the hands of a Myanmar junta that has destroyed food supplies of civilians resisting its rule.

Without meaningful cooperation by the junta towards resolving Myanmar's political crisis, Asean continues to insist that Myanmar send only a "non-political representative" to its high-level meetings. While this grates on the junta, it has been watered down through other diplomatic developments, say observers.

Bangkok, for example, has recognised the Myanmar-junta appointed ambassador to Thailand. Myanmar junta defence minister Mya Tun Oo was allowed to take part in the June 22 Asean defence chiefs meeting, with Asean chair Cambodia defending his participation as a means to present a united bloc.

Jason Tower, Myanmar country director of the United States Institute of Peace, notes that Cambodia's actions appear to hew to Beijing's position, which is "business as normal with the regime".

China is one of Myanmar's most influential neighbours. "It's really moving forward with relations with the State Administration Council, treating it as it would any government," he said, using the Myanmar junta's self-appointed name.

Ironically, this is taking place while the junta is losing its grip in the country.

"Things are very fluid in the sense that we do see the military under unprecedented pressure. I don't think it's been under this kind of pressure internally or internationally in the past decades," ISEAS-Yusof Ishak Institute fellow Moe Thuzar told The Straits Times.

In a press conference on June 22, Myanmar's shadow National Unity Government claimed that it and its allies controlled more than 50 per cent of Myanmar's territory. While this claim is hard to verify, military analysts agree the junta is struggling to crush the armed resistance, which has grown in size and sophistication.

Myanmar researcher Ye Myo Hein wrote in May: "Despite obvious inferiority in weaponry, one-year armed struggle has gradually tipped military balance in favour of the anti-junta forces. Contrary to its leader's claim, in reality, the (junta) has already lost all prospects of completely annihilating its new enemies."

The junta, he wrote, is "overstretched and essentially fighting several distinct wars simultaneously, all while remaining unable to reliably command the loyalty of the Bamar majority and perhaps even its own troops". As a result, it has switched its strategy from "how to control" to "how to survive".

But there is no decisive victory in sight as well for the anti-junta forces, which remain disunited and underfunded.

Asean is nearing a crossroads on the Myanmar crisis, with its year-old "five-point consensus" road map discredited as nothing more than a catchphrase.

At the recent Shangri-La Dialogue in Singapore, Ms Pornpimol Kanchanalak, Thailand's special representative on Myanmar, warned against "cancel rhetoric", saying that condemnations and punitive measures against the Myanmar military have reached the point of diminishing returns.

Other analysts have questioned the benefits of being soft on the junta.

As the international community mulls over the way forward towards political dialogue in Myanmar, "the fact that the military is being challenged internally as it has never been before is something we cannot lose sight of", she adds. - The Straits Times/ANN