PHNOM PENH (The Phnom Penh Post/Asia News Network): The labour and finance ministries are set to implement a pension plan under the Labour Law.

A directive on the pension scheme was signed by Minister of Labour and Vocational Training Ith Samheng (pic) and Minister of Economy and Finance Aun Pornmoniroth on June 28.

“The pension plan is to be implemented for individuals who qualify under Article 39 of the Labour Law,” the directive said.

In March, Prime Minister Hun Sen signed a sub-decree consisting of 10 chapters and 40 articles to provide the pension plan for individuals qualifying under the law so workers in the private sector could benefit like those in the public sector.

The sub-decree covers individuals qualifying under the law, including those working two jobs. The National Social Security Fund (NSSF) is to manage the pension fund as stipulated in the sub-decree.

It said that for the first five years, contributions were set at a rate of four per cent, half to be paid by employers and the other half by employees, with payments to be made monthly.

Labour ministry spokesman Heng Sour said those qualifying under the law would have to pay the contributions to receive the benefit.

National Trade Union Coalition (NTUC) president Far Saly said he had yet to receive information as to what extent of workers would be included in the plan. 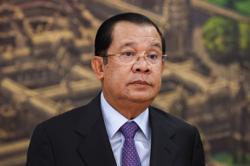